If drastic measures are not implemented in an effort to safeguard both players and spectators during school football matches, someone could get seriously injured, or even killed.

This is the plea of former national footballer and cricketer, Derrick Edwards, who is calling on both the Ministry of Sports and the Royal Police Force of Antigua and Barbuda to collaborate on making venues where matches are hosted safer.

“I was at a game on Friday at Golden Grove and it was scary, and I think that the Ministry of Sports has to start getting some police at those venues when it comes to those school games because I am afraid that somebody is going to lose his life, and before that happens, I am appealing to the people in authority to get the lawmen around those football games, because it is getting violent,” he said.

Derrick pointed to an incident that erupted at the match on Friday that could have easily resulted in someone either being badly hurt or killed.

“It was about 20 children, no more between the age of 14 and 15, and it was like a gang, and those guys were pelting missiles left, right and centre. Vehicles were coming and so on, but these guys didn’t even care that cars or anyone was passing, they were just throwing stones,” he said.

“The scary part about it was that I saw one of the little guys, no more than 14, with a backpack. and he pulled down that backpack and took out a cutlass and ran after someone with his hand in the air, and I had to call out to him, I had to shout out, ‘Hey!’” the president added.

The former national striker and prolific goal-scorer, opined that the now widespread practice of smoking is contributing to the violence seen amongst young people.

“Frankly speaking, I think we are going to lose this generation because of the smoking, it’s the 13-year-olds and 14-year-olds who are consuming that thing like they are drinking water or they taking oxygen. The smoking is causing a lot of the violence. When that thing gets to your head it’s like they do all sorts of nonsense, and we have to get the police at the grounds when the school league is playing or else somebody is going to get hurt,” Edwards said.

Matches in the ongoing schools’ football competition are played at a variety of fields on a daily basis. 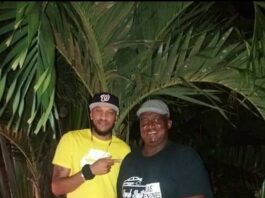