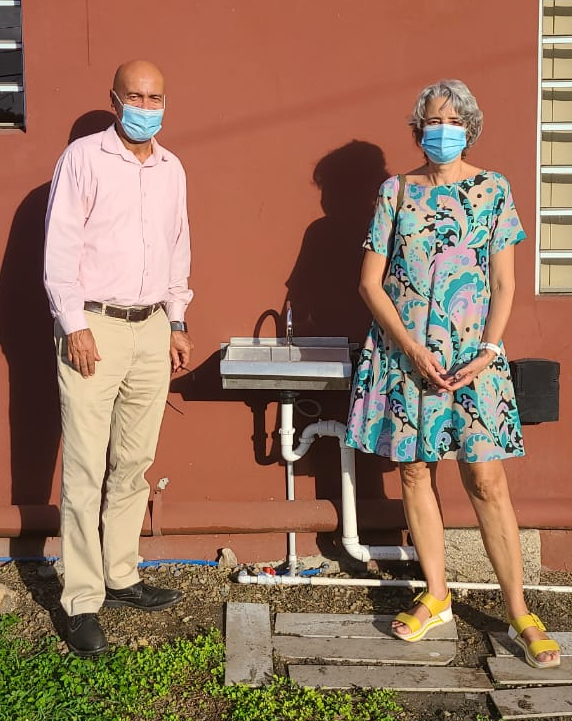 The Rotary Club of Antigua Sundown in collaboration with the Honorary Consul Patricia Geiger and the Consulate of Switzerland continues to embark on a massive venture to install hand-washing stations in many of the nation’s schools.

During an inspection, President Julian Wilkins and Honorary Consul Patricia Geiger of the Consulate of Switzerland in Antigua had a first-hand view of several units installed at Ottos Comprehensive and St Joseph’s Academy.

The Consulate contributed US $20,000 to the project. The units were made locally and installed by the Caribbean Water Treatment.

So far, the club has installed 49 units in eight secondary and 11 primary schools, and by the end of the project, the goal is to install a total of 70 units.  The hand-washing station installation project complements two of the areas of focus according to Rotary “Disease Prevention and treatment,” and “Water and Sanitation.”

Over the years, Rotary Club of Antigua Sundown has enjoyed a thriving relationship with the Consulate of Switzerland and Antigua, and have partnered in successfully executing major projects on island.

During the inspection, Honorary Consul Patricia expressed how delighted she was to have been able to facilitate the project, and she pledged to continue supporting the work of Rotary.

In comments of gratitude, President Julian Wilkins thanked the Consulate for their generosity and commended the organisation for their continued effort to promote the cause of Rotary, and making a difference through the club in the nation of Antigua and Barbuda.

Rotary is about serving in areas of need. Through this on-going project, we would play our part in controlling the impact of Covid-19.