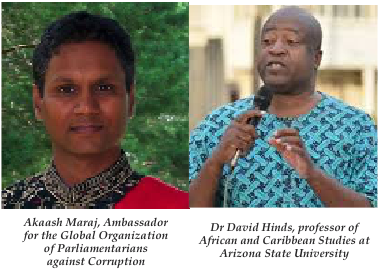 With the first meeting of the Economic Recovery Committee (ERC) being deemed a success by its chairman, Prime Minister Gaston Browne, a number of officials believe that in order for the body to continue to flourish an expansion is needed.

The ERC was established to find solutions to the country’s economic fallout in “the wake of the unexpected and severe exogenous shock of the Covid-19 pandemic”.

In addition to the PM, other members of the committee are representatives from the Antigua and Barbuda Chamber of Commerce and Industry INC, Antigua Barbuda Workers’ Union, Employers’ Federation, Christian Council of Churches, and Antigua and Barbuda Hotels and Tourism Association, among others.

Akaash Maraj, Ambassador for the Global Organization of Parliamentarians against Corruption, is of the opinion that the body should now broaden its scope and even bring in experts from around the region and internationally to contribute.

He said that this move could be an historic one if done right.

“If they are going to go down that route with the PM being the chair, then I think it would be valuable to have greater representation from other political parties and I would say for particular in Antigua, there would be value in inviting experts from outside the country to be a part of the process.

“Antigua and Barbuda is a country with a modest population and this is a global pandemic. Realistically, the solutions and the strategies that will help the country cannot be confined to just Antigua and Barbuda. They must bring in expertise from around the world and ultimately it will probably require cooperation between small countries from other parts of the world and the Caribbean.

“I think this is a real opportunity for Antigua and Barbuda, the government, and the people to exercise a form of global leadership by extending the membership of this group to bring in that expertise and to join hands with people who are in a similar position to the country,” he said.

“Too often we tend to draw narrowly from the same set of people. There are Antiguans and Barbudans all over the world [who are] making meaningful contributions to the development of different countries, but I have never seen any government in my lifetime reach out to the Antiguan and Barbudan diaspora to tap in to that intellectual capacity of people who would not just bring their expertise but would also bring a level of patriotism and love for our country, so that they would be looking to develop strategies that will have overwhelming impact for the wider society,” he added.

Meanwhile, Dr David Hinds, professor of African and Caribbean Studies at Arizona State University, said in order for the committee to progress the “government and opposition must be on the same page” as they “represent a significant amount of the population”. Leader of the Parliamentary Opposition, Jamale Pringle, along with the political leader of the United Progressive Party, Harold Lovell, have both publicly declined the invitation to join the ERC.