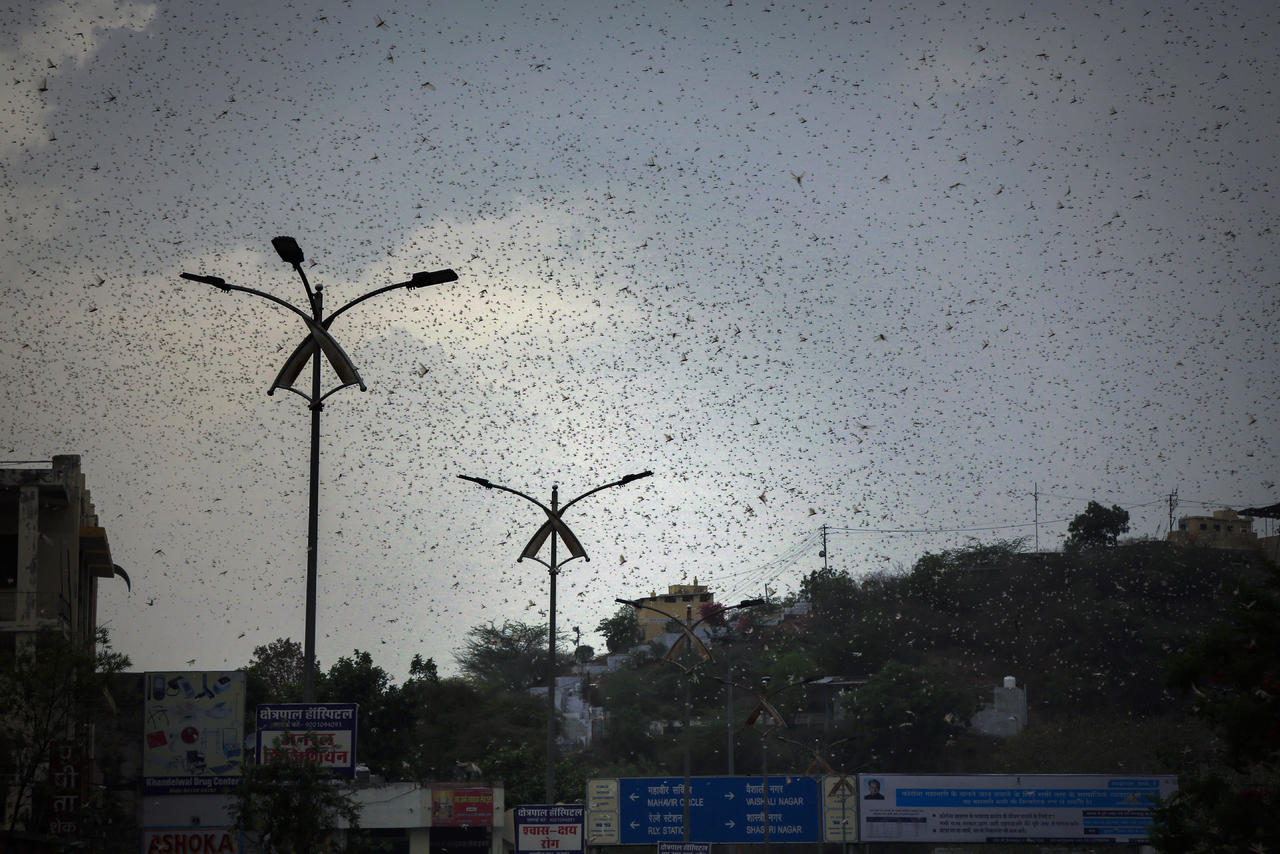 (cbsnews) – India is scrambling drones, sending teams to spray insecticide and issuing alerts as swarms of locusts descend on its western states. The drones are helping track the voracious insects as they destroy crops, increasing fears over food security and economic malaise in a country already battered by the coronavirus pandemic.

As if the dual menaces of COVID-19 and crop-killing insects wasn’t enough, a wide swathe of India was also suffering under record heat. As the locusts ravaged fields in Rajasthan, farmers already reeling from the effects of a national coronavirus lockdown were left to watch helplessly in 122-degree heat.

It’s the worst locust infestation India has seen since 1993, according to the country’s Locust Warning Organisation (LWO), but the swarms aren’t new to the nation. Usually they arrive from Pakistan between July and October and remain focused in Rajasthan. This time, however, weather conditions have helped the swarms spread into neighboring states.

Videos posted on social media show swarms not only in the farm fields but also in urban areas, including the popular tourist city of Jaipur, where they’ve never been seen before.

What is a locust?

Locusts are similar to grasshoppers, but can migrate over much large distances: A swarm can cover about 90 miles in a day. The desert locusts are known to form particularly dense, and highly mobile swarms, according to the United Nations’s Food and Agriculture Organization (FAO) desert locust information center.

They don’t attack people or animals, but they’re considered the most destructive migratory pest in the world, with a small swarm of about 40 million locusts capable of gobbling up enough food for 35,000 people.

A 1-kilometer swarm (covering just under half of a square mile) can have up to 80 million locusts, and at least 10 such swarms were chewing through crops in India as of Wednesday, according to the LWO.

Several Indian media outlets reported that about 123,500 acres of cropland had already been destroyed in Rajasthan and Madhya Pradesh states.

The crop damage comes as many farmers were already struggling with the impact of India’s 2-month coronavirus lockdown, which left them largely without the workers to tend to their crops. The double crisis could pose a serious threat to India’s food security in the coming months.

Experts have warned that more swarms, still devouring crops in Pakistan and the Horn of Africa, could migrate to India in June.

Scientists have said extreme weather is to blame for the unusually large and widespread swarms this year.

“The outbreak started after warm waters in the western Indian Ocean in late 2019 fueled heavy amounts of rains over east Africa and the Arabian Peninsula,” explained Dr. Roxy Mathew Koll, a senior scientist at the Indian Institute of Tropical Meteorology. “These warm waters were caused by the phenomenon called the Indian Ocean Dipole — with warmer than usual waters to its west, and cooler waters to its east. Rising temperatures due to global warming amplified the dipole and made the western Indian Ocean particularly warm.”

“Heavy rain triggers the growth of vegetation in arid areas where desert locusts can then grow and breed,” said Koll. “These locusts, which migrated to India early this year, might have found greener pastures as the pre-monsoon rains during March–May were in excess over north India.”

Keith Cressman, the senior locust forecasting officer at the U.N.’s FAO, said there’s been an undeniable and significant increase in the frequency of severe rain storms at both the beginning and the end of the summer and, “if this trend continues, whether it is specifically attributed to climate change or not, it’s likely to lead to more Desert Locust outbreaks and upsurges in the Horn of Africa.”