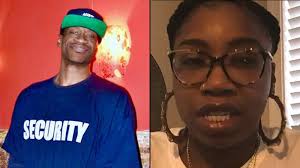 “I would like for those officers to be charged with murder because that’s exactly what they did,” Bridgett Floyd said.

The sister of George Floyd, who died after a Minneapolis police officer pressed his knee onto his neck for at least eight minutes, said firing the officers involved is not enough — she would like them to face charges.

“I would like for those officers to be charged with murder because that’s exactly what they did. They murdered my brother; he was crying for help,” Bridgett Floyd said on the “TODAY” show Wednesday, adding that the loss of her brother was “heartbreaking” for her family.

Video of the Monday night incident showed a white police officer with his knee on Floyd’s neck as Floyd pleaded, “Please, please, please, I can’t breathe.”

Bystanders begged the officer to remove his knee, before and after Floyd goes silent. The officer did not move for at least eight minutes, at which point paramedics carried Floyd away. He was later pronounced dead.

Minneapolis police said in a statement early Tuesday that the officers were responding to a report of a forgery when Floyd “physically resisted” and that he died after “suffering medical distress.”

But civil rights attorney Benjamin Crump, who is representing Floyd’s family, said videos that emerged immediately after the incident and further footage from security cameras and bystanders tell a different story.

“You look at the video, and it doesn’t seem like he was posing a threat to police officers, and they did not have to use lethal excessive force,” Crump said on CNN on Tuesday night.

“It’s worse than Eric Garner in many ways because you hear the people even pleading with them, ‘Please get your knee off his neck. Have some humanity; this is a human being,'” Crump said on “TODAY.”

Crump said that without video, he believes police would have “swept it under the rug.”

Hundreds of protesters on Tuesday night filled the intersection where Floyd was pinned, carrying banners that read, “I can’t breathe” and “Jail killer KKKops.”

They later marched to a police station, where officers in riot gear confronted them and deployed tear gas and fired projectiles. Some protesters kicked canisters back toward police.

The Minnesota Bureau of Criminal Apprehension and the FBI are both independently investigating Floyd’s death.

Bridgett Floyd, who wore a shirt saying “I can’t breathe” during her “TODAY” appearance, said, “I don’t need them to be suspended and able to work in another state or another county. Their licenses should be taken away; their jobs should be take away, and they should be put in jail for murder.”

She added that she was confident the officers would be charged. “I have a lot of faith because I believe in the utmost powerful God. Faith is something that me and my brother always talked about because he was a God-fearing man,” Floyd said. “I believe that justice will be served — I have enough faith to stand on it.”

Crump said he also hopes Floyd’s death will act as a “tipping point.”

“We have to say, everybody deserves equal justice, and we have to send a message with this case. We can not allow those who are supposed to protect and serve us do this,” Crump said. “There can’t be two justice systems — one for black America and one for white America — we have to have equal justice for the United States of America.”