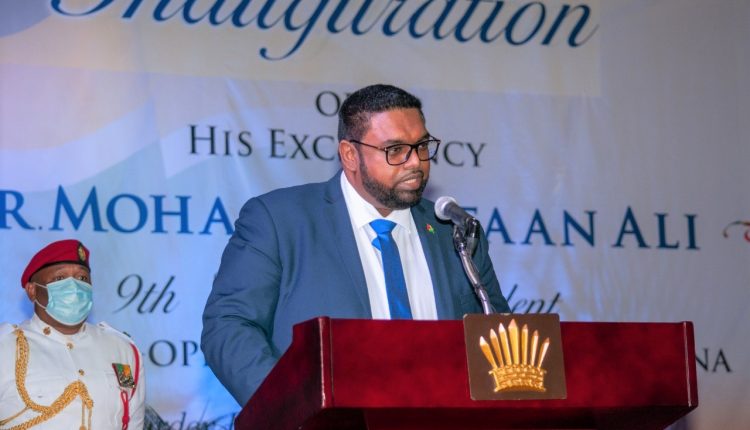 (newsroom.gy) – The People’s Progressive Party (PPP) Government has committed to reviewing the five-month electoral process to determine what exactly transpired and penalize those who sought to “corrupt the system.”

“A review of events – related to the electoral process over the last five months – will begin shortly in order to determine, forensically, exactly what transpired and to hold accountable any persons who sought to pervert and corrupt the system,” President Irfaan Ali said at his inauguration ceremony on Saturday.

The March 2020 General and Regional Election was marred by litigations and other efforts to alter the results in order to declare the former APNU+AFC administration as the winner instead of the PPP who gained over 15,000 more votes at the poll.

The process was further drawn out by a national recount, triggered by efforts from the Returning Officer for the largest voting district Clairmont Mingo, to inflate votes for the Coalition. The recount lasted over 30 days.

Private criminal charges have been filed against the Chief Elections Officer Keith Lowenfield who on four occasions presented figures which sought to give the Coalition a victory even when the recount showed differently.

Dr Ali on Saturday said everyone is “painfully aware” of the trauma and anguish endured by Guyanese over the five-month period “as vigorous attempts were made to destroy our democratic credentials, and deny the will of the electorate.”

“All of us have an obligation to the nation and to ourselves to ensure that never again should any generation of our people be subjected to such unlawful behaviour,” he added.

The President thanked the international community for their push to ensure democracy including CARICOM which sent two teams to supervise the national vote recount.

“History will ever recall that singular role of regional solidarity,” Dr Ali noted.

To ensure there is never a recurrence, President Ali said his Government will pursue the necessary reforms to ensure the nation’s democracy is stronger and the electoral process more transparent.