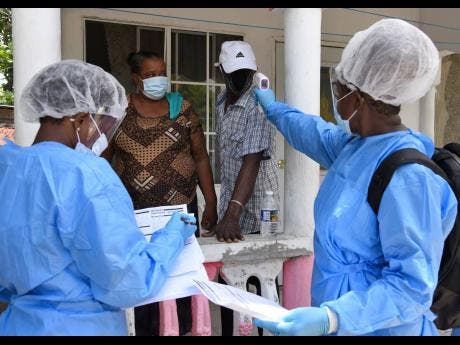 (Jamaica Gleaner) – The death of a 13th Jamaican from COVID-19 and a surge of 59 new infections in the last 48 hours could push government authorities to crack down harder on movement and specific industries to curb the virus’ rapid spread after a lull in June.

The latest deceased is an 88-year-old woman from Clarendon, the epicentre of a spike that has triggered a 14-day quarantine in the community of Sandy Bay. She died on August 4.

Friday’s tally of 29 new samples brings the total number of confirmed cases in the island to 987.

One hundred and seventy-seven of those cases are active.

Of the new infections, nine are females and 20 are males, the youngest carrier being 15 years old.

Twelve of the cases are from St James and have been linked to a flight from the Dominican Republic.

Meanwhile, Tracy-Ann Yungsang of Church Corner is now facing a familiar foe that so many Jamaicans and communities have confronted since the onset of COVID-19 here: stigma.

That’s her reality after soldiers swooped down on Church Corner, Bamboo River and areas of Summit as the sun set on Independence Day, Thursday.

Many Jamaicans who have tested positive for the novel coronavirus have faced threats and xenophobia from others fearful of contracting the highly contagious disease.

“Yes, we are in quarantine for 14 days but is not everybody in the community have the virus. I don’t like the stigma,” said Yungsang.

“People keep saying that a di whole of Church Corner have this and I don’t like that. They make it seem as if we are an unruly community and we don’t care about our elders.”

Yungsang, who lives with her elderly mother, said that she is only aware of one child in Church Corner who has tested positive.

Her mother, 71-year-old Desna Chevannes, also shared that contracting the virus was not among her chief fears.

Pointing to the heavens, she said, “See who me fraid a deh! Mi trust in the Lord thy God. Mi nuh fraid a nothing more. A two times me test since this start and me nuh have it.

Chevannes lauded Prime Minister Andrew Holness and the health ministry for what she described as “good work” and the speed with which the community lockdown was executed.

Jamaican health authorities are fearful that the increasing ambivalence towards compliance with COVID-19 health protocols could put the country on a collision course with the disease.

During a visit of the impacted areas on Friday, Health and Wellness Minister Dr Christopher Tufton revealed that a total of 31 COVID- 19 cases have been confirmed in St Thomas within a seven-day period.

Describing the recent developments as a concern, Tufton sought to assure Jamaicans that the parish would be treated with priority testing and a quick turnaround of results.

Noting that none of the 31 confirmed carriers was critically ill, Tufton said that four of the patients have co-morbidities that made them vulnerable.

“Of the 31 since Friday, we have 11 at the hospital, four at a facility in Kingston and a number of persons in home isolations, homes that have been assessed. Provisions are also being made at a small hotel in the parish to house other isolated cases,” the health minister said.

Citing concerns over acute shortages of food and medical supplies after the imposition of quarantines in other communities in the past, St Thomas Eastern Member of Parliament Dr Fenton Ferguson pleaded for officials of the health and social security ministries to work in tandem to quickly supply the needs of his constituents.

Concerns were also raised about the shopping arrangements being put in place for approximately 1,000 affected residents.