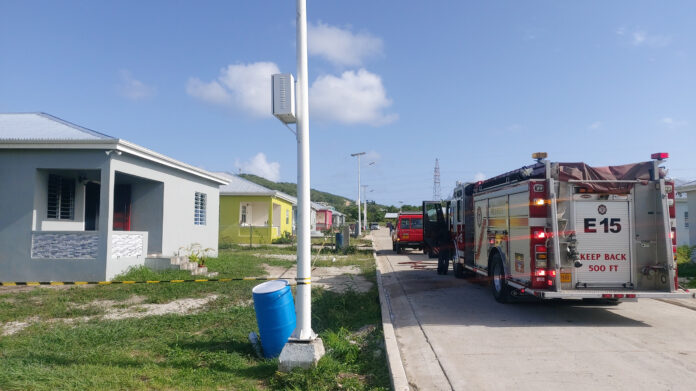 Daleer Harley was speechless looking upon her new home, where firefighters had just extinguished the last flames and combed through the remains of her burnt furniture.

It was not at all how she imagined her first few weeks at her new residence to be, but on Wednesday morning she received news that the house she had occupied with her children for two short months was on fire.

“I left home at about 6.55 this morning, took my kids to school, then I went to work. I got to work around 7.20am and then a few minutes later I got a call to say that there was smoke coming from my house,” she recalled.

Fire officers stationed at the St John’s Fire Station responded to the call at the Paynters Development. On arrival, officers noticed smoke spouting from the windows of Harley’s residence and began work to extinguish the blaze.

When Observer arrived on scene the fire was completely extinguished but main areas of the home had already been damaged. Harley, surrounded by a few neighbours who sought to comfort her, watched on in disbelief.

She had not yet made up her mind about where her family would spend the night – she was still too busy trying to make arrangements for her insurance company to assess the damage. A blackened refrigerator lay outside on the lawn not far from the burnt concrete building.

Meanwhile, Bernard – one of her neighbours who was present when the firefighters were telephoned – commended the officers for their quick response, noting that the outcome could have been much worse if they did not get there soon enough.

“I have to give kudos to the St John’s Fire Station for responding within what I would consider record time,” he remarked, noting that when the call was made, smoke had begun to come through the roof of Harley’s house.

He remembered that officers arrived within eight minutes of receiving the call, telling Observer “Speaking to some of the guys just now, it’s one of the new fire trucks that they’ve just ascertained, the one coming from PLH [the Peace, Love and Happiness development] to be exact.”

He added, “They say it’s one of the best pieces of equipment they have gotten in a long time and because of them responding within that time they were able to preserve a lot more of the house.”

Senior Sergeant Pryce, the senior officer on the scene, told Observer that officers received the call at around 7.30am and took approximately 15 minutes to extinguish the fire.

“We’re continuing our investigation which has begun already,” he said, noting that the kitchen and a section of the living room were mostly affected in the blaze.

Although the matter is under investigation, the homeowner said the fire is believed to have originated from an outlet where a refrigerator was plugged in in the kitchen.