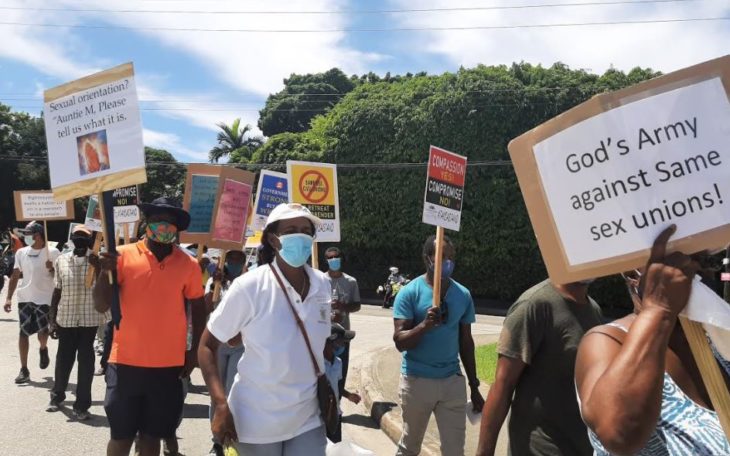 (Barbados Today) – Members of 49 churches across the island came out in strong force this morning to show that they are standing up against the legalization of same sex unions in Barbados.

More than 200 people marched through Holetown, St James, with placards in hand, sending a clear message to the Government that the church is not in agreement with making same sex unions legal.

Behind a music truck and the guidance and control of members of the Royal Barbados Police Force (RBPF), the peaceful protest started at Trents Playing Field, to Sandy Crest, and back to the playing field where a mini rally was held.

Executive Director of the Family-Faith-Freedom, the Registered Charity, which organized the march – the first of several – Dr Veronica Evelyn, said the gathering consisted of worshippers and leaders from different denominations, who came together to protest Government’s announcement of its decision to recognize same sex civil unions.

“As you know, it’s COVID time and we have to be careful so we are limited in numbers, we could not go over 250, so we are very happy with the turn out,” Dr Evelyn said.

Meanwhile, Chairperson of the registered charity, pastor Paul Leacock, said the series of marches would clearly demonstrate the church’s disagreement and request for Government to reconsider and rescind its decisions to institutionalize same sex unions in Barbados, according to last month’s Throne Speech read by Governor General Dame Sandra Mason.

Leacock said the church is clear that such a decision to include those kinds of policies, which are in dis-harmony with the country’s laws and out of sync with the constitution, morals and standards of the nation, will have a detrimental effect on the country.

Leacock stressed that Government must consider studies conducted in other parts of the world, which show that similar policies were implemented and led to significant sociological dislocation and problems.

He said young people who are experiencing changes in life, are particularly affected and are confused by sociological dislocation.

“We could see from those persons and those denominations, in Canada, England, Europe, United States, we have seen massive confusion and all kinds of psychological issues, high rates of suicide, high rates of various dysfunction in families and we know that Barbados cannot sustain such decisions. It is not appropriate for Barbados,” Leacock said.

“Therefore, we want to say that righteousness exalts a nation, but sin is a reproach. Therefore the various churches from all across Barbados are demonstrating that they are not in favour. The same people that have elected Government are saying to the Government who are the servants of people, and the servants of good and the servants of God, rescind your orders, turn around and do not bring this evil upon the country,” he added.

The marches have been scheduled to take place in different zones across the country, every Saturday, until sometime in November. Next week’s march will be held in St George.