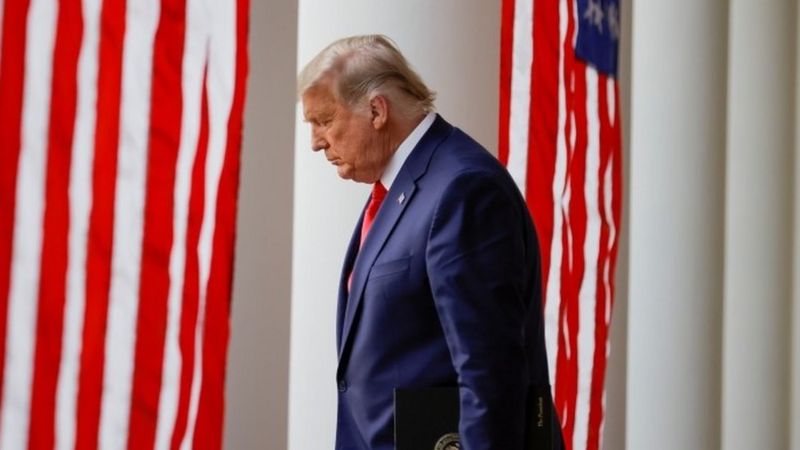 (BBC) – Donald Trump has insisted he is not conceding the US election, despite seemingly acknowledging for the first time that Democrat Joe Biden won.

“He won because the Election was Rigged,” the Republican president wrote on Twitter, repeating unsubstantiated claims of election fraud.

About an hour later he said he was not conceding the 3 November vote.

He has launched a slew of lawsuits in key states, but has not provided any evidence to back his claims of fraud.

All the lawsuits have so far been unsuccessful.

On Friday, election officials said the vote was the “most secure in American history” and there was “no evidence that any voting system deleted or lost votes, changed votes or was in any way compromised”.

The Democrat has 306 votes in the electoral college – the system the US uses to choose its president – which far exceeds the 270 threshold to win. Any recounts or legal challenges are not expected to overturn the overall result.

In a news conference on Friday, Mr Trump said “who knows” which administration would be in power in the future.

His refusal to concede has heightened concerns about the US government’s ability, going forward, to tackle growing Covid-19 infection rates.

Is this as close as Trump will get to conceding?

Some Biden supporters consider the president’s comments amounted to a form of concession, although it was far from unqualified.

“He won”, began President Trump’s initial tweet, before descending into his customary slew of unsubstantiated allegations of electoral fraud.

Mr Biden won, continued the president, because there were “no vote watchers or observers allowed”, repeating his claims of a conspiracy led by the left and the media – while still presenting no evidence.

Indeed, within a couple of hours, he contradicted his “He won” comment with another tweet, which read: “He only won in the eyes of the fake news media, I concede nothing.”

In essence, that is about as far as President Trump is likely to go. Even if he eventually acknowledges he won’t be president from 20 January, he will probably never relinquish his unsubstantiated claims that he was beaten in a fraudulent vote.

Twitter added warnings to Mr Trump’s latest allegations of wrongdoing on Sunday, saying: “This claim of election fraud is disputed.”

The Trump campaign has launched a series of lawsuits saying Republican poll watchers were wrongly denied access to observe the counting of ballots in key battleground states.

Election officials have denied this and insisted rules were followed. Most of the lawsuits have been dismissed over lack of evidence.

However, thousands of Mr Trump’s supporters protested in Washington DC on Saturday to back his appeals.

Flag-carrying demonstrators were joined by members of far-right groups including the Proud Boys, some wearing helmets and bullet-proof vests.

The largely peaceful demonstration saw some violence later in the evening, as Trump supporters and counter-protesters clashed in several skirmishes.

Officials said 20 people had been arrested on a variety of charges, including assault and weapons possession. One stabbing was reported. Two police officers were also injured. What do Trump supporters think of a Biden presidency?

Mr Trump’s refusal to concede has stalled the normal handover process to the new government, ahead of the 20 January inauguration.

The General Services Administration (GSA), the government agency tasked with beginning the process, has yet to recognise Mr Biden and his running mate Kamala Harris as winners.

The Biden team have not been given access to classified security briefings, federal agencies and funding needed to ensure a smooth transition of power.

Speaking to NBC on Sunday, Mr Biden’s chief of staff, Ron Klain, said the process needed to begin this week to allow the country to focus on tackling the coronavirus pandemic.

“Joe Biden’s going to become president of the United States in the midst of an ongoing crisis,” said Mr Klain. “That has to be a seamless transition.”

Leading US infectious diseases expert, Dr Anthony Fauci, echoed his comments, saying it would be better for public health if the transition began immediately.

“Donald Trump’s Twitter feed doesn’t make Joe Biden president or not president”, he said. “The American people did that.”