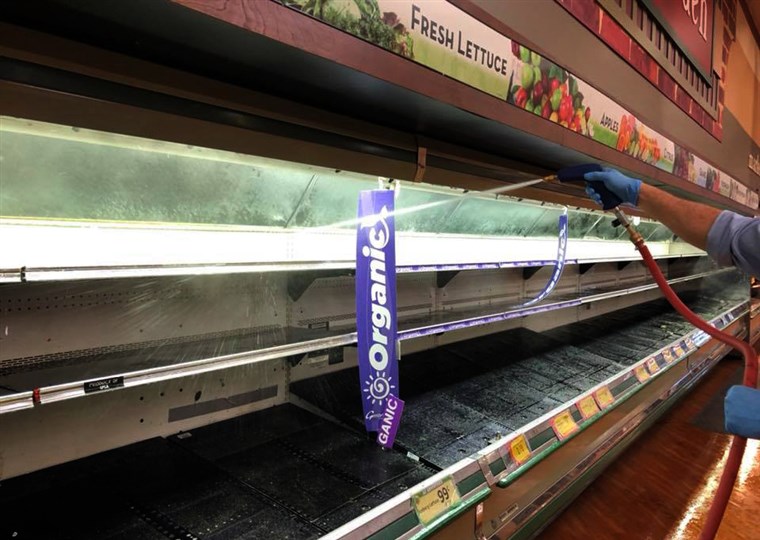 (nbcnews) – A woman played a “twisted prank” at a Pennsylvania grocery store Wednesday by purposefully coughing on about $35,000 worth of food, which had to be thrown out, the supermarket said.

“Today was a very challenging day,” Joe Fasula wrote on the Facebook page of the Gerrity’s supermarket chain, which he co-owns.

“A woman, who the police know to be a chronic problem in the community,” walked into the chain’s Hanover Township store and “proceeded to purposely cough on our fresh produce, and a small section of our bakery, meat case and grocery,” Fasula said. Authorities are working to get the woman tested for coronavirus, he said.

“While there is little doubt this woman was doing it as a very twisted prank … we had no choice but to throw out all product she came in contact with,” he said. “Working closely with the Hanover Township health inspector, we identified every area that she was in, we disposed of the product and thoroughly cleaned and disinfected everything.”

Fasula wrote that supermarket staff estimated the value of the food to be “well over $35,000.”

“I am also absolutely sick to my stomach about the loss of food,” Fasula wrote. “While it is always a shame when food is wasted, in these times when so many people are worried about the security of our food supply, it is even more disturbing.”

In a statement last week in which Fasula announced employees at his nine stores would receive an extra $1 an hour, he shared that some departments, including the meat and dairy sections, were lacking food as people rushed to stock up in the midst of the pandemic.

Fasula said his staff “did the best they could to get the woman out of the store as fast as possible” and get police on the scene. He added that the local district attorney’s office said it will pursue charges against the woman.

The Hanover Township Police Department confirmed in a statement that it is investigating the incident and that charges would be filed against the suspect, who underwent a mental health evaluation.

“The only silver lining to this travesty is that it gave us the unfortunate opportunity to test our protocols and demonstrate how seriously we take your safety,” Fasula concluded. “One thing is for sure, we will have the cleanest display and freshest produce anywhere in northeast PA.”