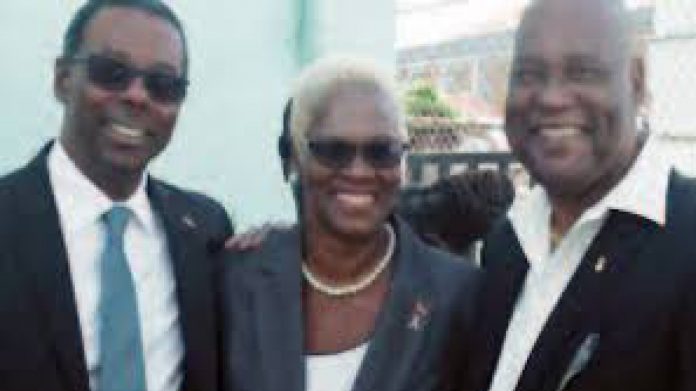 General Manager of the Antigua and Barbuda Transport Board (ABTB) Hubert Jarvis was one of two witnesses questioned on Friday in the ongoing trial against three former government ministers.

Dr Jacqui Quinn-Leandro, Harold Lovell and Wilmoth Daniel are accused of corruption, conversion and embezzlement involving the acquisition of three 2008 Daewoo buses allegedly donated to the Antigua and Barbuda government from the government of South Korea.

In 2008, when the vehicles were acquired, Jarvis was identified as the authority who cleared them from the Customs Department.

He was employed as the Product Development Officer whose responsibility it was to licence and register all government vehicles.

Jarvis told the court he was directed by Harry Josiah – the then General Manager – to facilitate with clearing the vehicles but claimed he had no knowledge of who drove them to the motor pool where they “stayed for a while”.

During cross examination he told attorneys for the defence that the buses were brought in by the Ministry of Foreign Affairs but that they were not registered in the name of the government.

He also outlined the former and current procedures for registering vehicles with the Transport Board.

According to him, in 2008, different government ministries were involved in registering their own vehicles and that it was not then or now mandatory for a vehicle owner to licence and register their own vehicle.

He said however that it is important that the owner sign the documents at the board but there are instances when an agent signs for the owner. The insurance and licence documents submitted to the court did not bear the signature of Quinn-Leandro or Lovell.

Additionally, Jarvis said that the buses arrived at the motor pool in an unlicensed state but would have had to be licenced to leave the facility.

He also told Lovell’s attorney that the buses would not have been given to the accused or their agents if they were not registered in their names.

Anesta Weekes QC, the attorney representing Harold Lovell, suggested to Jarvis that there was in fact no suspicion that the procedure which caused her client’s name to be registered on the licencing and insurance documents was improper or illegal, noting that at no point was a complaint raised by management.

In response, Jarvis, who said he had full confidence in how his staff handles their duties, admitted that by releasing the documents, the authority would have been “satisfied” with the data presented on it.

Caudley George, a member of the United Progressive Party (UPP) and a former employee with the Ministry of Tourism, also testified to licencing and insuring a Daewoo bus on behalf of Lovell who at the time served as the Minister of Tourism.

George told the court that he was instructed by the minister to “pick up” the documents but by default he had assumed operational responsibility for the vehicle and it was left to him to determine how the bus was utilised.

Based on his understanding, he told the court that the bus was to be used to facilitate programmes within the St John’s City branch and was usually parked somewhere in the community or, with his permission, at the home of the main bus driver.

“Anybody or any organisation who needed help with their travels, whatever they may be, we would accommodate them in whatever way we can,” he said.

He also testified that the bus was “ready to go” and that when he arrived at the Transport Board the C plate denoting a commercial vehicle was already affixed to it.

The case has been adjourned until 9am on Monday morning.