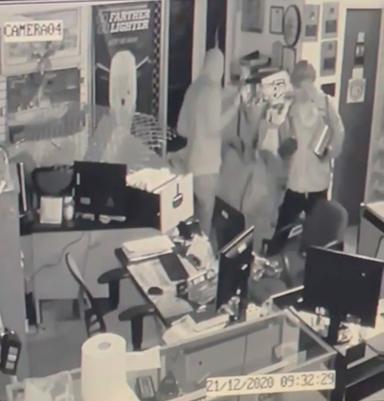 While many businesses are struggling to remain open during the Covid-19 pandemic, thieves have been unrelenting in their efforts to further cripple these local enterprises.

Chief Executive Officer (CEO) of Paradise Boat Sales, Paul Ryan is calling on other business owners to remain vigilant, particularly during the Christmas season, after thieves stole EC $10,000 worth of items from his store.

“This time of the year, it’s very challenging for business people to be dealing with the influx of persons coming into their business, not knowing who is who. I would just probably make sure that everything is recorded and keep a good track of your customers’ images as they come into your business place so that if they happen to be the ones that are coming back to rob your business, you can find identifying marks on them,” Ryan said.

“These robbers, they were obviously on the property before and knew exactly where to go for what they wanted to take up. They knew that cameras were in the place so they were properly cladded. I mean head gear, mask, I mean basically only their eyes were visible.

“It’s really a challenge when persons disrupt your business operations when they break into your establishment; getting things back to normal usually takes a couple of days however I guess it is the sign of the times,” he told Observer.

On Monday, around 9.30 pm, two assailants illegally entered Paradise Boat Sales on Old Parham Road and made off with several pieces of marine equipment and electronics.

“They probably got about $10,000 worth of goods which includes navigational equipment, Garmin equipment, they would have also gotten some VHF radios, marine fibre glass resin in the gallon tins and quart tins,” Ryan said.

The businessman said the police also found safety gear, first-aid kits, and flares and flare replacement in the backyard of the property – items that the assailants left behind while they reportedly fled the scene of the crime.

After spending some time trying to pry open the burglar bars, the owner said the thieves were able to enter through a window.

He surmised that “once they had access to the inside the alarm would have come on. So they had approximately seven or eight minutes inside the building before the security personnel came”.

The police, who Ryan said showed up 15 to 20 minutes after the security personnel, are now investigating the break-in.

Security footage of the incident show two male figures wearing gloves, face masks, shorts and long-sleeved jackets with hoodies that covered their heads while they rummaged through drawers taking up whatever they could find.

Ryan said the police were able to retrieve the tool the men used to break into the property, and their footwear from the scene which they may be able to get DNA samples from.

He is hoping that in future the police will be more on guard and improve their response time.

“I think they really need to step up their patrols in their various business districts, around the city and within the city and obviously in the other environs outside the city to try and curb this crime. The response time needs to be improved and I think that is one of the challenges I think that most businesses face when they have perpetrators on their property,” he said.