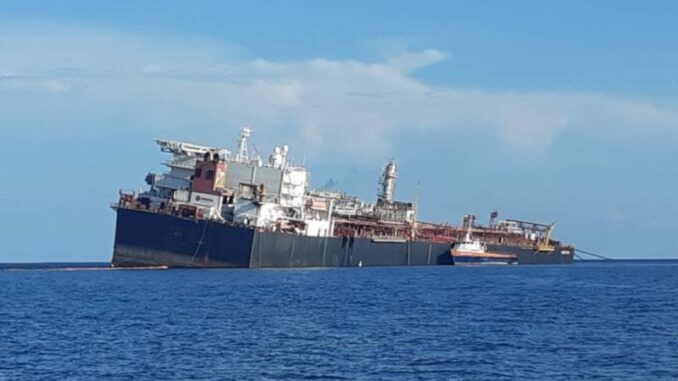 (news784.com) – With pictures taken yesterday showing the oil tanker tilting in the water, Venezuela has agreed to Government’s request to do an official inspection of the vessel on Tuesday.

And the US Embassy, which is supporting moves to have the vessel brought up to standard, has assured its sanctions against Venezuela doesn’t target such activities and insists Venezuela must fix the vessel.

“Government has maintained its serious concern about this vessel’s stability and the environmental threat to the Gulf of Paria and we’ve also been in touch with the US Embassy on the issue all the way up to yesterday (Thursday),” Browne said.

Browne spoke as the Fishermen and Friends of the Sea group yesterday went to sea and took pictures of the vessel, which sits in the Gulf of Paria loaded with 1.3 million barrels of oil.

Nabarima’s been a source of concern as a potential environmental disaster since July when it began taking on water and was listing to the right. Venezuelan state-owned PDVSA oil company, which operates the vessel, assured issues were fixed and it was stable. After international news reports on the vessel’s problems, however, Government decided to get independent verification.

An inspection team comprising Coast Guard, Energy Ministry, Institute of Marine Affairs and other officials was organised to complete an inspection of the vessel in September. But permission is needed by T&T to enter Venezuelan jurisdiction and the Foreign Affairs Ministry was told by Venezuela authorities the visit couldn’t be done before October 20.

Concerned the vessel would capsize, FFOS general secretary Gary Aboud undertook a nine-hour trip yesterday to the vessel. Their vessel circled the Nabarima at a distance and sent up a drone to take photos. People on Nabarima’s deck stood looking at them,

Aboud said,” The vessel is tilting at 25 to 30 degrees and increasing. Its anchor chains are taut, under extreme pressure. What if these anchor chains break and the vessel capsizes and spills the oil into our fishery ecosystem?

“There’s been no third-party disclosure whether the oil is in sealed or secure compartments. Some might say we had no business going there but we have a duty to the 50,000 fishermen and everyone else in the Caribbean Sea.”

He added, “Misinformation released by the Maduro regime claiming the vessel is stable and which our Government seems to accept … PM Rowley, we call on you to act urgently! The Caribbean Sea is endangered. Your silence won’t be forgiven.”

Yesterday morning as the FFOS did its inspection, Browne’s ministry detailed T&T’s efforts to get Venezuela to agree to the inspection.

“Since initial reports, the Government consistently utilised all available channels to press for verification of the vessel’s status. Our Ministry, Energy, National Security have all been actively working on solutions,” the ministry said.

The ministry said the Venezuelan government indicated the vessel was indeed tilting some time ago but emphasised they’d conducted initial stabilisation works and it “was no longer in danger.” The government then immediately sought actual verification.

The ministry said on Thursday the Venezuelan Ambassador categorically described as “total propaganda” a new photograph of the vessel purportedly tilting. The ministry said the Ambassador claimed the photograph was actually taken over one month ago before stabilisation work was done but was now being used as a current photo in an effort to mislead.

The ministry said Government has used all available channels to verify the truth of the situation and achieve access.

It said it had held talks with the Ambassador of Venezuela to Port-of-Spain, Venezuela’s Foreign Affairs Minister and other senior Venezuelan officials, T&T’s Ambassador to Caracas and the US Ambassador.

“Our Government maintains its concerns about the threat to the environment and continues to seek the best for our people. Our expert inspection team’s ready to proceed,” it said.

Meanwhile, the US Embassy said yesterday it was concerned over the potential risk to safety and the environment posed by the vessel and said it will facilitate moves to resolve the issue.

“We strongly support immediate actions to bring the Nabarima up to international safety standards and avoid possible environmental harm, which could negatively impact not only the Venezuelan people but also those in nearby countries,” the US Embassy said in a statement.

“PDVSA has a responsibility to take action to avoid an environmental disaster in Venezuelan waters. As a general matter, the United States’ Venezuela sanctions programme is not designed to target activities addressing safety, environmental, or humanitarian concerns.

These activities to avert an ecological disaster are consistent with US policy to support the Venezuelan people and avoid further harm to the environment.”