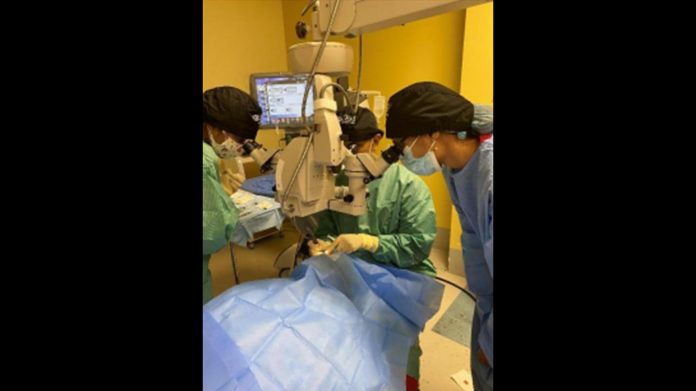 According to a release from the SLBMC, 107 surgeries were performed from both Antigua and the sister isle Barbuda over a five-day period.

The patients who were operated on were described as “both young and old”.

“Cataracts are one of the leading causes of blindness, and most cases, if not all, can be corrected with a 15-minute operation,” said Dr Albert Duncan, SLBMC Medical Director.

“There shouldn’t be people in our communities in the prime of their lives, unable to take care of themselves and their families because of blindness from cataracts. That’s why our hospital, with the support of the Ministry of Health, is committed to working with partners to enhance the level of care available to the community.”

A cataract is a cloudy area in the naturally clear lens of the eye that affects vision. Most cataracts occur as a result of normal aging, but radiation exposure, taking steroids, diabetes, and eye trauma can accelebrate the development of cataracts. As a cataract develops, the eye’s lens gradually becomes cloudy, allowing less light to pass through, which makes it more difficult to see.

“This was really a team effort, complemented by administrative staff that helped to make the entire process a smooth one for our patients and families. We’re all looking forward to the next clinic as there are still many patients waiting to receive this life-changing surgery – and we plan on doing everything we can to make that happen.”

Dr Dias added that people stop being productive when they get cataracts, and productive people are less productive because they have to take care of their blind family members.

“One of the most cost-effective ways of fighting poverty is eliminating blindness, as every dollar invested into prevention will result in a positive economic return, as improved sight empowers individuals to be more productive and reduce assistance needed from their caretakers and family members. The social and economic impact of this project will be significant,” he added.

Cataracts are one of the most common age-related eye conditions and one of the leading causes of vision loss. The World Health Organization estimates that nearly 18 million people across the world are bilaterally blind from cataracts, making the condition responsible for almost half of all global cases of blindness.