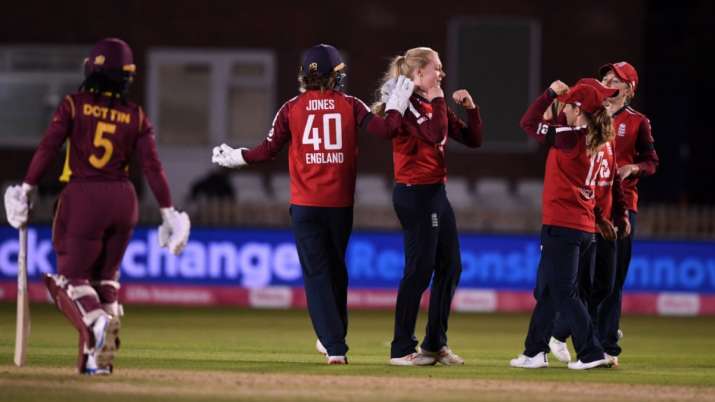 England cruised to a 20-run victory over West Indies to take an unassailable 3-0 lead in the five-match Twenty20 series in Derby.

Nat Sciver’s 82 from 61 balls was the standout performance as England made 154-6 on a sluggish pitch, with Shamilia Connell taking 2-13.

West Indies made a better attempt at their chase than in the previous two games, led by 63 from Deandra Dottin, but she fell with three overs to go.

The tourists could only reach 134-5 as England secured a comfortable win at the Incora County Ground.

This was an improved performance with the bat by West Indies, who have rarely looked comfortable chasing in all three matches.

Dottin once again led the way, but they were unable to find the boundary as the overs ticked down despite rearranging their batting line-up.

England had their own struggles with the bat but Sciver’s innings, coupled with leg-spinner Sarah Glenn’s 2-18, was enough to seal the series with two games remaining.