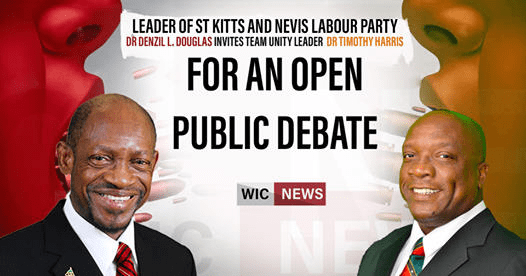 (SKNNEWS) – Rt Hon Dr Denzil L Douglas, who is the former Prime Minister of St Kitts and Nevis, has challenged the current holder of the post of the Prime Minister and Leader of the People’s Labour Party, Dr the Hon Timothy Harris to a one and one debate before June 5, 2020, general elections.

Dr Douglas has issued the challenge on Saturday during the WINNFM’s show Inside The News.

Douglas had told the listeners earlier that the people of St Kitts and Nevis trust him more that Dr Harris.Advertise right here on SKN News

He added that a debate should be facilitated between him and Prime Minister Harris.

Dr Douglas added that all that he has is as a result of his investments and said, all kinds of things have been at him. They said that he was going to be locked up five years ago. They said that a plane was at the airport waiting to take him out. People believe that Douglas is a trustworthy person. There was a severe character assassination on him during the last elections, and that is why he asks the PAM people and the PLP supporters to look at themselves today. Do they trust this man (Dr Harris)? Do they trust that team? And that they should look at Douglas after 20 years.

He said that if he invested in the properties that he believed were going to be critical for his future, his own money and he said that every bank account had been checked thoroughly and nothing was found. Every property that he had bought was through the bank. He still has mortgages on his properties.

Deputy Political Leader Hon Marcella Liburd and Dr Douglas had appeared during the first half of the show, Inside the News.

Hon Shawn Richards, the Chairman of PAM and the deputy prime minister and the minister of health, Hon Eugene Hamilton were guests on the second half of the show.