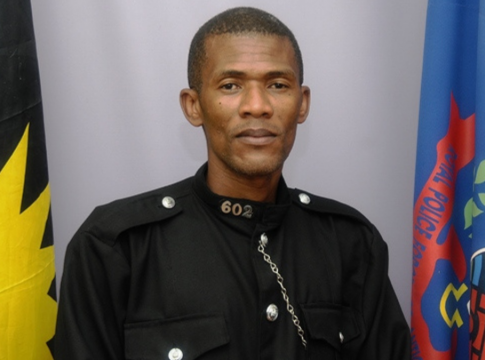 Members of the Royal Police Force of Antigua and Barbuda are mourning the sudden and tragic passing of Police Constable Clarence Cameron, following a traffic collision on All Saints Road, on Tuesday 3, August.

The allegations are that Cameron was traveling from west to east on the said road at a fast rate of speed, when he apparently lost control of his blue Suzuki Swift motor car.

In a press statement, the Strategic Communication Unit (STRATCOM) said the vehicle ran off the southern side of the road and collided with a Concrete Fence and a wooden utility pole.

The officer’s body was reportedly thrown from the vehicle upon impact.

Denise Horsford of Upper Gambles was also a passenger and had to be freed from the wreckage using the jaws-of-life.

She suffered facial injuries and is reported to be in stable condition at the Sir Lester Bird Mount St. John Medical Center.

Meanwhile, Commissioner of Police, Atlee Rodney has reached out to the immediate family of Constable Cameron and expressed sympathy on behalf of the entire police force.

He said “The loss of Constable Cameron or any member is always painful; especially under the circumstances in which he died”. He described Cameron as one who had a quiet personality and a friendly smile.

Rodney has also offered to provide the family and close colleagues with the
necessary support and counseling they need to help cope with the loss.

Likewise, His Excellency, The Governor-General of Antigua and Barbuda, Sir Rodney Williams, and the Hon. Prime Minister, Mr. Gaston Browne; along with the Minister of Public Safety and Labour, Hon. Steadroy Benjamin has all expressed words of condolences to the members of the police force for their loss.