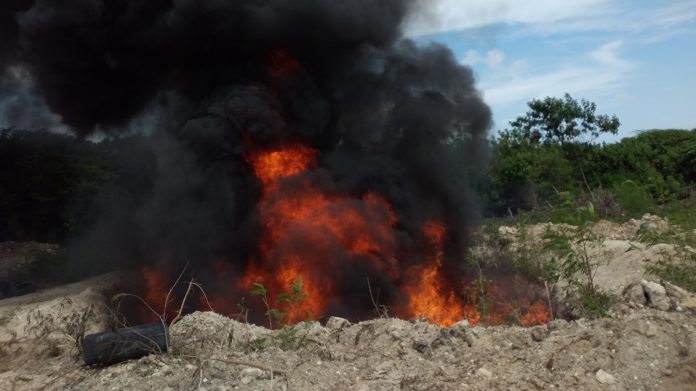 A large quantity of illegal drugs valued at more than $2 million was set ablaze at the Burma Quarry on Friday in the first drug burning exercise of the year.

Police officers and other law enforcement officials witnessed the event, which was also attended by firefighters on standby in case of any eventualities as cannabis, hashish and cocaine were destroyed.

This is the first drug destruction exercise for the year and is a slight drop from last year’s overall value of $3.36 million.

These illegal drugs were seized at the main ports of entry — Deep Water Harbour and the VC Bird International Airport — the General Post Office and from matters that occurred at the Magistrate’s Court.

Thomas thanked all law enforcement officials for their work in the confiscation of these items.

He says it was imperative that authorities continue to work together to continue the fight in getting illegal drugs off the streets.

“The work continues even in this pandemic. The police are committed to the task at hand. It is not an easy one to police at this point in time. Of course, we do depend on the Antigua and Barbuda Defence Force Coast Guard for assisting us with the maritime sector and for us to be successful it has to be a collaborative and cohesive effort from all the law enforcement agencies working together to ensure that we remain on top of things and so I must also commend the efforts of the ABDF,” Thomas said.

“I just want to ask the general public to at least continue to pass on information when they see anything suspicious. It does not necessarily have to be related to drugs but any criminal activities that they would have seen to pass the information along. We have Crime Stoppers back up and running so persons will not have to worry about their safety when giving information as you will remain anonymous,” he added.