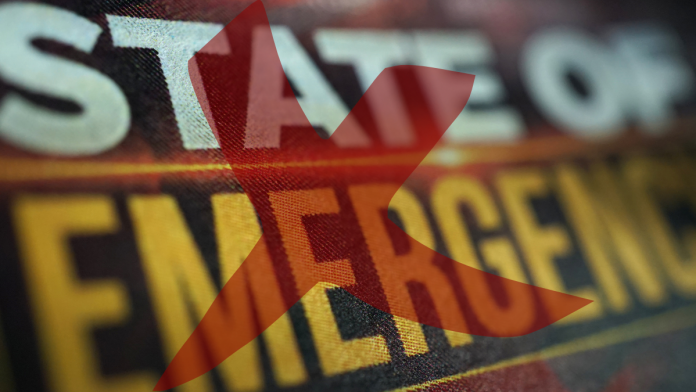 After debating the motion for several hours yesterday, the Parliament of Antigua and Barbuda unanimously voted to remove the existing State of Emergency (SoE), meaning residents and visitors will soon be freed from the shackles of the nightly curfew just in time for Christmas.

The SoE will officially come to an end at midnight on December 23, after being first implemented in March 2020 – 21 months ago – as a means of mitigating the spread of Covid-19.

It was extended on numerous occasions, with the government maintaining that it was necessary to keep it in place to ensure they could restrict the movement of residents without being subject to any legal ramifications.

This constantly drew the ire of many across the twin-island’s socio-political landscape, who insisted that the government was being unreasonable in keeping the SoE in effect, especially during times when Covid infections were low and the country was in a relatively safe situation.

So, despite the looming threat of the Omicron variant, many will breathe a collective sigh of relief that they will be able to move about the country in the most normal sense since the start of the pandemic.

Certain businesses in particular – like bars, restaurants and entertainment establishments – will no doubt be overjoyed, having had to curtail their operations for months on end to remain in compliance with the curfew restrictions.

Similarly, small business owners, including those that are involved in catering, delivery and cosmetology, will welcome the decision as their businesses often require them to move about at ‘odd’ hours and sometimes at a moment’s notice.

Visitors who also travel hundreds of miles to soak up the culture of the island will be able to experience the buzzing nightlife – whether it be out at a bar in the wee hours of the morning, or eating late night street food from local vendors.

While this may all sound wonderful, though, there is an important caveat to acknowledge, as Prime Minister Gaston Browne declared during his presentation.

“The reality is that when you reduce socialisation, it helps to reduce the risk of transmission; it works every time. That is why these curfews are introduced from time to time whenever we see an escalation in the transmission of Covid.

“We have to understand, too, that the Omicron variant is far more transmissible than the Delta variant, so we will be monitoring the situation on a weekly basis, and if we see an increase in the transmission of Covid – especially the Omicron – then we may well have to come back to Parliament and introduce a new State of Emergency and a new curfew,” the PM explained.

The country’s Chief Medical Officer, Dr Rhonda Sealey-Thomas, confirmed to Observer this week that no infections with the Omicron variant have been found in samples sent from Antigua and Barbuda to the Caribbean Public Health Agency (CARPHA) for testing.

The point was reiterated in Parliament yesterday though, that it could only be a matter of time before it makes its way into the island.

Bearing that in mind, the public should remember that, even though the curfew will finally be lifted, the public health protocols, such as mask-wearing, social distancing and handwashing/sanitisation, will remain in place for the foreseeable future.