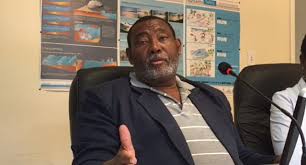 To date, only about 5,000 residents have  downloaded the Early Warning System app known as the CAP.CAP app in Google Play Store, and disaster officials are not satisfied that it is enough.

Philmore Mullin, the Director of the National Office of Disaster Service (NODS) told Observer that everyone in the country should take advantage of this free system that allows authorities to detect early signs of flooding, tsunamis, and other disasters.

Mullin made the comment after a 5.1 magnitude earthquake shook the country early Friday morning.

“The last time I checked, which was several weeks ago, we were approaching 5,000. We want to encourage the general public to download the app. That will be very important in getting the message on time. Once a tsunami has been triggered by an earthquake or by any other source, we send the message and you get it in almost real time, directly to your phone as opposed to waiting for a radio station or television station to tell you,” Mullin explained.

He said that most people may not be in favour of downloading apps, but he stressed the importance of downloading this particular one since Antigua and Barbuda is prone to disasters.