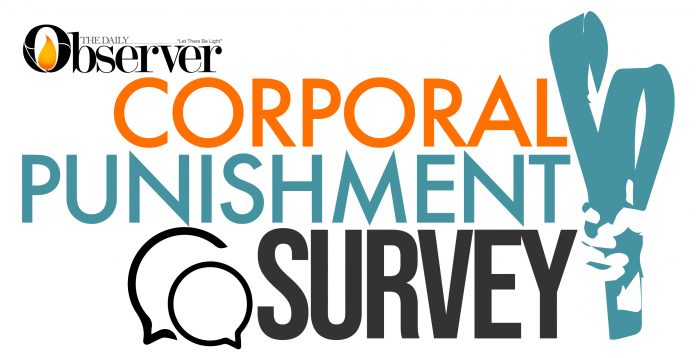 Almost two in three parents in Antigua and Barbuda do not support corporal punishment.

At least that is the result of a three-week long survey launched by Observer to get a better sense of whether parents were in favour of abolishing or keeping the practice in schools.

Discussions over ending this type of discipline resurfaced late last year, when Cabinet ministers voiced their intention to host a public consultation on the matter.

The announcement was a reaction to two young girls coming forward, claiming to have been badly bruised following separate beatings from teachers.

A total of 305 people responded to our survey, which consisted of 10 questions aimed at gauging parents’ thought process on corporal punishment.

Observer found that 187 of the participants – or 61 percent – voted to abolish physical punishment in schools, while 147 voted to keep it.

Another one of our questions gave us greater insight into why some people were for and others were against current legislation.

We asked the respondents whether they had ever received corporal punishment at schools – and if they would allow their children to be disciplined in the same way.

The majority of those who responded (64 percent) said they would not allow their children to receive corporal punishment at schools while the other 35 percent said they would.

Sixty percent said they did not think corporal punishment was even necessary; 16 percent said children were too rude and out of hand; and another 10 percent replied that some children only learn with beatings.

But 20 percent of the respondents gave more specific answers to the question.

One person said beatings demonstrated that actions have consequences.

The famous quote “spare the rod and spoil the child” was also flung about.

“I believe in what the word of God says, ‘Spare not the rod and spoil the child’. ‘Rod’ is as literally as it is. This does not mean time out, giving lines or speaking to the child about his or her behaviour,” one participant said.

“It is a deterrent of bad behaviour and should remain in schools so children would know that if they do not practice self-restraint, the beating apparatus will be utilised to achieve the restraint they wish to avoid,” another person shared.

“Teachers need all methods of reinforcement possible, and teachers need the support of parents to reinforce good behaviour,” wrote someone else.

However, some of the opposing voices obviously felt differently, like the participant who wrote, “Corporal punishment was a slavery way of keeping slaves in fear so that they don’t run away and do what they were told. We need to get away from slavery mentality.”

“I’m not against disciplining children in school, however, I do think beatings should be done by parents or guardians. Some teachers and members of staff from my school experience have abused their power while enforcing beatings based off of their personal feelings towards the child,” another replied.

One of the participants called it “barbaric” and said “it violates the conventions that we signed. I encourage every parent whose child received this intentional infliction of physical and emotional distress to sue both the inflictor, and his/ employer for damages!”

One of those conventions is the United Nations’ Convention on the Rights of the Child.

Article 19 in particular says “states parties shall take all appropriate legislative, administrative, social and educational measures to protect the child from all forms of physical or mental violence, injury or abuse, neglect or negligent treatment, maltreatment or exploitation, including sexual abuse, while in the care of parent(s), legal guardian(s) or any other person who has the care of the child.”

Last month, eight months after government announced a public consultation would take place, Education Minister Daryll Matthew asserted there was “nothing else to say” on the matter.

“The issue was well ventilated in public space,” he claimed.

But when asked whether they had been consulted about the possibility of abolishing corporal punishment, 88.8 percent of participants responded no.

In fact, of the 11 percent who said they were consulted, only 3.36 percent said the consultation was adequate.

In June 2019, the Ministry of Education introduced new guidelines that outlined and sanctioned how corporal punishment is to be meted out to local schoolchildren.

The student should be informed of the reason he/she is being punished and how many strokes they will receive on their buttocks; there must be a third person in the room (not a student) when punishment is being administered; there will be a maximum of six strokes (6) for secondary school students and no more than four (4) strokes for primary school students.

Many say these guidelines are not always adhered to.

Current corporal punishment guidelines dictate that students should only be beaten on their buttocks with a leather strap of specific measurements.

So, with that being said and the deed being done, we asked participants if they thought corporal punishment made any difference in their lives – and all agreed that it did.

The difference however is that 57 percent said they were not positively impacted because of these lashes while 42 percent believed that this type of discipline helped them become better people.

Some said they were beaten on the back and all over their body while others received lighter punishments like detention, being asked to write lines or to spend time outside the class, or suspended in the case of others.

“I was beaten with a cricket bat on my hands, legs and butt as a young girl,” said one participant, while another said, “I was so afraid of a particular teacher to the point I was afraid of being wrong, afraid to ask for help. It took leaving that school to have an open mind to math.”

One more said, “Most times the one administering the punishment is not aware or does not care where you get the blows once the job is done. Many times, the belt reaches the lower back or even wraps around and hit the vagina. Most offences were minor – mainly tardiness – and to me did not warrant physical punishment.”

Some of the respondents who said their lives were positively changed also acknowledged that corporal punishment can lead to violent behaviour – a total of 44.9 percent to be exact.

In summary, the survey indicates that more people than not are opposed to corporal punishment and even those who agree to maintain this type of discipline acknowledge that it can have negative effects on a child.