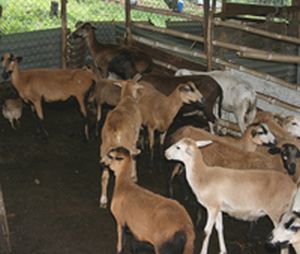 Livestock farmer Dandridge “Danny” Joseph is appealing to the public for help finding a permanent home for his animals.

Joseph’s 100-plus sheep, cattle and goats have been temporarily moved to a small space next to his farm in Jennings New Extension where he has been based for over a decade.

He claims a dispute over his lease with government saw his fence and buildings demolished earlier this week, leaving his animals that have an estimated value of $400,000 at risk.

“Right now, I am just trying to salvage what I can. I can’t just move my animals. I have nowhere to put them. It’s over a hundred sheep and goat combined and a few cattle,” he said. “I just don’t know what to do – hopefully I may get some help.”

He claims he reached out to the Ministry of Agriculture for a renewal of the lease for the land which expired in 2016 but never received a response. Instead he received a notice from the Development Control Authority (DCA) telling him he was occupying the grounds illegally and would have to vacate the area immediately.

“My lease was up from government but they didn’t give me any chance to reapply for the land. Apparently, someone was watching the land and as soon as the lease was up [DCA] came to me,” he said.

“So I went to the Ministry after I received that letter because I didn’t lease any land from DCA and I was talking to them about the situation and they told me to apply for the piece of land and I did but I never heard back from them and then earlier this year, I got the information from DCA that my farm would be demolished and they came on Monday morning and pushed down my fence and they mashed down one of my pens I had for my sheep,” Joseph continued.

However, Acting Director of Agriculture Gregory Bailey says the ministry offered to assist Joseph in housing his animals at one of its facilities in Paynters.

But Joseph claims the Paynters location is not suitable.

“They came for the animals this morning {Friday} but I had moved them before they came because I am not pleased. They have animals there and they die every day,” he claims.

“I spoke to the PS of Agriculture today and the director and they said they will talk to the chief veterinarian about finding a piece of land for me to put the animals. I hope it would be a permanent place.”

He added, “I worked for the Ministry of Agriculture for 42 years and I can’t believe that is the way they are treating one of their own. When I was working our aim was to help farmers to produce not to harass them [but] I guess we are operating in a strange time.”
Calls to the DCA for comment were unsuccessful.