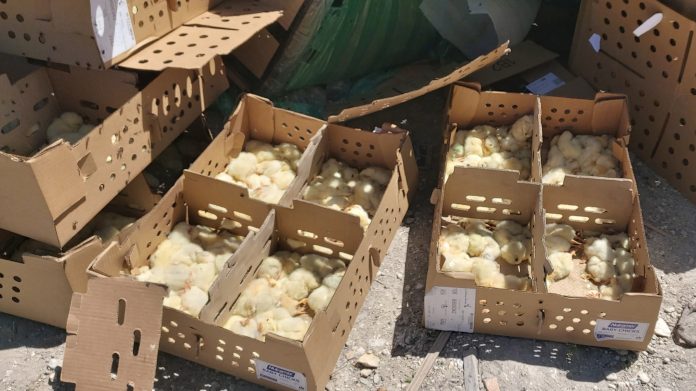 The National Solid Waste Management Authority (NSWMA) has opened yet another investigation – this time into the improper disposal of dozens of young chickens.

More than 10 boxes filled with clutches of chicks – some dead and some alive – were dumped on the roadside in the sweltering heat near the LIAT cargo premises in Coolidge.

Litter wardens recorded the incident on Monday morning and a full investigation is underway.

Once identified, the person who dumped the animals is expected to be charged under the country’s Litter Control and Prevention Act.

Litter Control and Prevention Coordinator, Dionne Gordon said the Authority received a call on its hotline, identifying the illegal dumping.

When they arrived on site, Gordon said they observed certain practices that should not happen.

The boxes were uncovered with flies swarming over dozens of dead and dying baby chickens near a commercial area.

“We will have to get the information as to who disposed the waste there and then afterwards, we will go through the necessary proceedings in terms of getting the statement and when we get all our information then we submit the complaint without oath to the court, and then serve the individual with the summons,” she explained.

Observer confirmed that the animals had been imported into the country.

Sheri Williamson, Education and Marketing Officer at NSWMA said the best approach is to research the matter and hopefully stop what could be a ripple effect of illegal dumping practices.

Meanwhile, Chief Veterinary Officer, Dr Tubal Edwards told Observer that the birds did not die of any disease, but of exhaustion and low temperature from a delayed flight.

“The birds died because of exhaustion and low temperature because they were in the haul of a plane for at least six hours. The flight was delayed coming out of Jamaica, it bypassed Antigua, went down to Barbados where it spent several hours, got back here about 7pm,” he explained.

He said the flight was only supposed to be about two-and-a-half hours.

While the circumstances are unfortunate, Dr Edwards said he does not agree with how the farmer disposed of the chicks and he will also be looking into the matter.