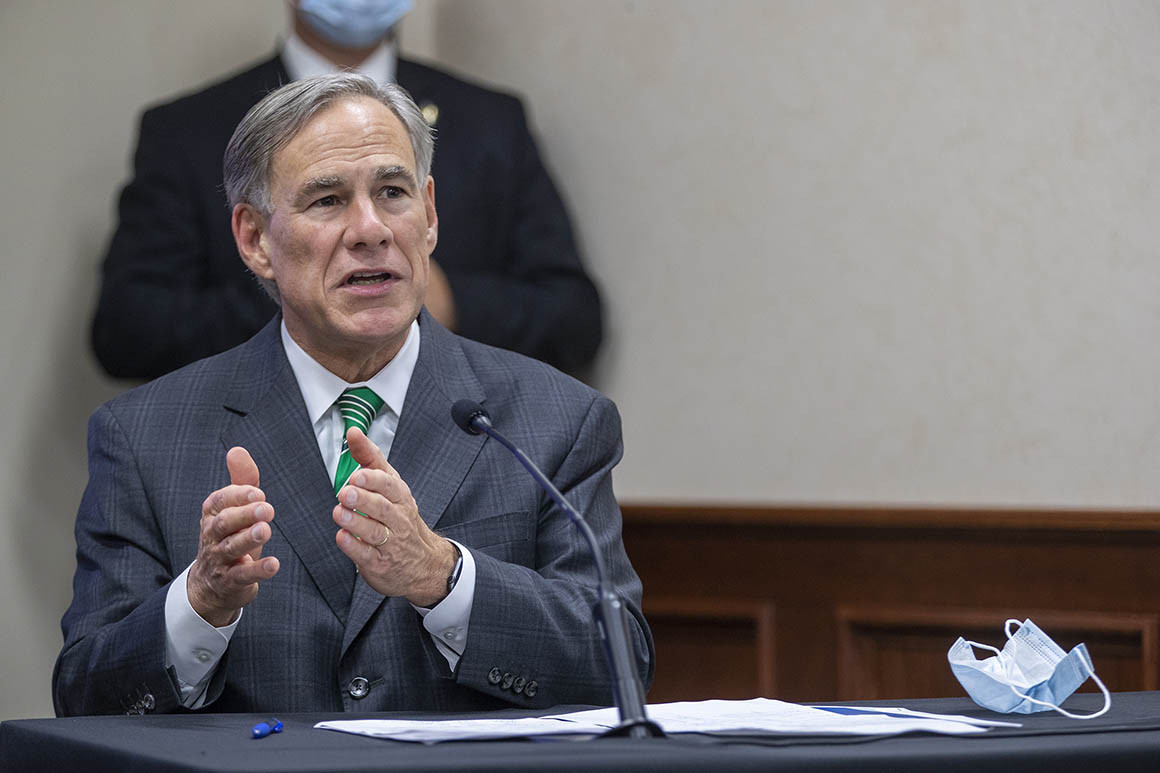 (nbcnews) – The governor of Texas hit the brakes on reopening his state Thursday as hospitals were inundated with “an explosion” of new COVID-19 cases and officials warned there might not be enough beds available.

“The last thing we want to do as a state is go backwards and close down businesses,” Gov. Greg Abbott said in a statement. “This temporary pause will help our state corral the spread until we can safely enter the next phase of opening our state for business.”

Abbott urged “all Texans to do their part to slow the spread of COVID-19 by wearing a mask, washing their hands regularly and socially distancing from others.”

“The more that we all follow these guidelines, the safer our state will be and the more we can open up Texas for business,” he said.

The surprise statement from Abbott came shortly after he issued an executive order designed to free up more beds in the state’s four biggest counties by postponing “all surgeries and procedures that are not immediately medically necessary.”

Not long after that, Texas Medical Center in Houston reported all its ICU beds were now occupied.VIEW THIS GRAPHIC ON NBCNEWS.COM

But the grim news was not just limited to Texas as the U.S. saw a record number of new coronavirus cases in a single day, with 45,557 reported Wednesday, according to a tally by NBC News.

Southern and Western states like Arizona and Florida that began aggressively reopening around Memorial Day are now seeing staggering spikes that make clear the deadly virus is showing no sign of going away, as President Donald Trump has repeatedly predicted.

Overnight, Florida added 5,004 new COVID-19 cases and the state’s death toll climbed to 3,327. Arizona reported 3,056 new cases and 27 additional deaths Thursday. And there was no evidence yet that the Black Lives Matter protests that swept the nation for the last three weeks after the police killing of George Floyd were fueling the sudden rise.

“We reopened against the backdrop of a lot of persistent spread in those states, so it’s inevitable that cases were going to go up,” former federal Food and Drug Administration Commissioner Scott Gottlieb said on MSNBC’s “Morning Joe.” “I think they’ve gone up more than most people expected, and I’ve certainly been surprised by the acceleration in the cases as well. I think most of us were.”

In New York, Gov. Andrew Cuomo insisted Thursday he was serious about enforcing the two-week quarantine that he and the governors of New Jersey and Connecticut want all visitors from current coronavirus hot-spot states like Texas, Florida and Alabama to follow.

“The law is, if you come in from another state you have to self-quarantine for 14 days,” Cuomo said on CNN. “If you don’t, and you get caught, you will have violated the law, you can be fined.”

“If you fly in to New York, we’ll have your name, we’ll know where you’re supposed to be staying. There will be random checks,” he added.

But public health and policing experts told NBC News they have serious doubts about whether such a requirement can be enforced, while one pundit suggested Cuomo’s move was political payback against Florida Gov. Ron DeSantis, who had called for New Yorkers to self-quarantine for two weeks in March when coronavirus cases were spiking in New York.

In New York City, Mayor Bill de Blasio announced that the city was “on track” to begin phase three of its reopening on July 6. That would include reopening outdoor recreational areas like dog runs and basketball courts, and allowing indoor dining in restaurants and the operation of nail salons at 50 percent capacity.

As the country shut down to stop the spread of the coronavirus, the roaring economy that began under President Barack Obama and continued under Trump was brought to an abrupt halt by the pandemic.

The effects of that were evident Wednesday when the Department of Labor reported that 1.48 million people filed for unemployment benefits last week. It was the 14th straight week that states processed over one million first-time applications.

Larry Kudlow, the director of the National Economic Council, conceded in an interview Thursday with Fox Business Network that “there are spikes in hot spots, there’s no doubt about that, and there will be some shutdowns, in individual places.”

But Kudlow said he believes that by the end of the year the unemployment rate will go below 10 percent, and “it’s going to be a steady drum with higher jobs and lower unemployment.”

The current national unemployment rate is 13.3 percent, according to the Labor Department.