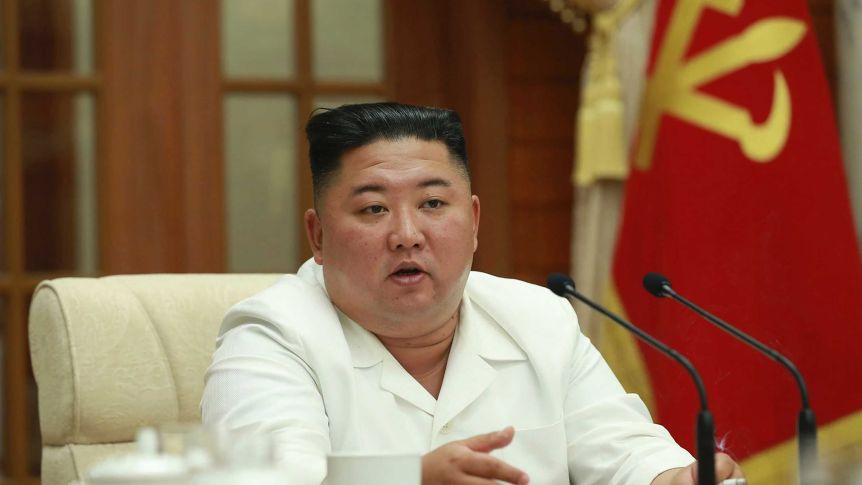 South Korea has said the 47-year-old man was found by troops floating in the North’s waters.

He was then shot dead and his body was set alight, according to Seoul.

It is not known what the man was doing there. The South Korean government has said he may have been trying to defect to the North but his family has denied this.

The killing – the first of a South Korean citizen by North Korean forces for a decade – has caused outrage in the South.

The border between the Koreas is tightly policed, and the North is thought to have a “shoot-to-kill” policy in place to prevent coronavirus from entering the country.

What did Kim say in his apology?

The apology came in the form of a letter sent to President Moon which acknowledged that the incident should not have happened, according to South Korea’s presidential office, also known as the Blue House.

Mr Kim called it a “disgraceful affair” and said he felt “very sorry” for “disappointing” Mr Moon and the South Korean people, the Blue House said. It is the North’s first official comment on the incident.

The North also gave the South the results of its investigation – it said more than 10 shots were fired at the man, who had entered North Korean waters and then failed to reveal his identity and tried to flee, South Korea’s director of national security Suh Hoon said.

However the North insisted that it had not burned the man’s body but rather the “floating material” that was carrying him.

“The troops could not locate the unidentified trespasser during a search after firing the shots, and burned the device under national emergency disease prevention measures,” Mr Suh told a briefing, referring to the North Korean account.

The presidential office in Seoul has also decided to release recent letters between the two leaders.

In them Kim Jong-un said he understood “more than anyone the kind of pressure and hardship” required to overcome the coronavirus pandemic and damage from recent typhoons. It was the “heartfelt truth” that he shared the “pain and suffering of the Southern people”, he said.

This incident could have been a disaster for any hopes of rekindling talks between the South’s President Moon and the North Korean leader Kim Jong-un.

As it is many South Koreans will not forgive or forget easily. They are shocked and outraged at what appears to have been the brutal killing of an unarmed civilian in North Korean waters. It is yet another reminder of North Korea’s often merciless regime.

It’s also worth noting that the North’s account of the killing does not match the details given by officials in the South. However, this rare personal apology from Kim Jong-un may go some way to assuage Southern anger.

If there had been no apology, Mr Kim’s warm letter to Mr Moon would have been wasted. By at least attempting to smooth things over, Mr Kim may be signalling his willingness to keep talking.

What happened to the man?

The father-of-two, who worked for the fisheries department, was on his patrol boat about 10km (6 miles) from the border with the North, near the island of Yeonpyeong, when he disappeared on Monday, the South Korean defence ministry said.

He had left his shoes behind on the boat. South Korean media said he had recently divorced and had financial problems.

A North Korean patrol boat found the man, who was wearing a life jacket, at sea at around 15:30 local time on Tuesday.

They put gas masks on and questioned him from a distance before “orders from [a] superior authority” came in that the man be killed, South Korea said. He was shot dead in the water.

What has the reaction been in the South?

President Moon Jae-in called the killing a “shocking” incident that could not be tolerated. He urged the North to take “responsible” measures over the attack.

The country’s National Security Council said the North could “not justify shooting and burning the corpse of our unarmed citizen who showed no sign of resistance”.

Officials said they had done a “thorough analysis of diverse intelligence”, but it was not clear how exactly they had gathered the information.

The military hotline between North and South was cut in June, and the inter-Korean liaison office, which was built to help both sides communicate, was destroyed by North Korea. But South Korean military is known to intercept the North’s radio communications, AFP news agency reports.

Mr Kim’s apology comes at a time when relations between the North and South are at a low point and there is a stand-off between Pyongyang and Washington over the North’s nuclear programme.

North Korea may be taking extra-tough measures to prevent the coronavirus from entering the country because it is thought to be preparing for a huge military parade on 10 October to mark the 75th anniversary of the foundation of the ruling Workers’ Party.

Pyongyang closed its border with China in January to try to prevent the spread Covid-19. In July, North Korean state media said the country had raised its state of emergency to the maximum level.

Last month, the commander of the US military’s forces in South Korea, Robert Abrams, said the North had introduced a new “buffer zone” of one to two kilometres on the Chinese border, and that the country had special operation forces in place with orders to “shoot-to-kill” anyone coming across the border.

In the past, North Korea has also returned people who have wandered into their territory. In 2017, state news agency KCNA said officials would repatriate a South Korean fishing boat which “illegally” crossed the border, in what was seen as a rare humanitarian move.