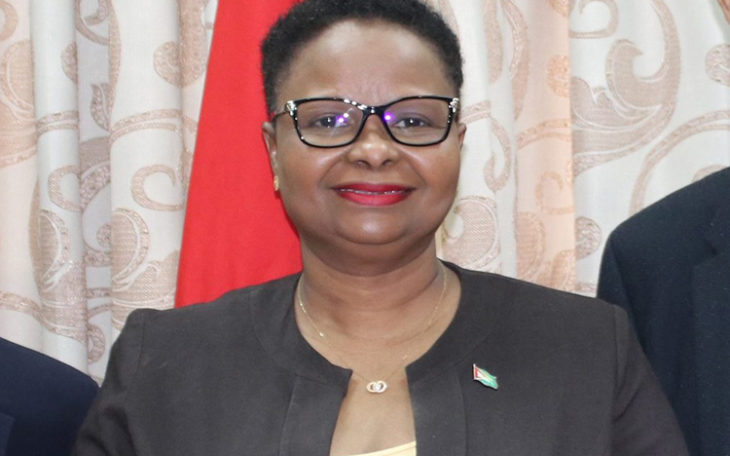 (CMC) – The chairperson of the main opposition People’s National Congress Reform (PNCR), Volda Lawrence, was on Wednesday slapped with a new charge of forgery arising out of the disputed March 2 regional and general election.

Lawrence, who was granted GUY$30,000 (One Guyana dollar=US$0.004 cents), appeared in the Magistrate’s Court alongside the Region Four Returning Officer Clairmont Mingo and the election agent for the PNCR, Carol Smith-Joseph.

Mingo and Joseph were jointly charged with one count of forgery. They are also facing two counts each of conspiracy to defraud and were each granted bail in the sum of GUY$30,000 on each charge.

They will return to court on October 28.

“This is the wickedness that we have to contend with, we turn up here, yesterday morning we went to CID for 8 o’clock, we were there on time and we were interviewed and asked the same question and they said that we would be charged, we asked them to let us appear before the Court yesterday…and at that time they didn’t know what they were charging me with, so we went away and we came this morning and we were asked to come here for 9 o’clock and still the charges did not appear until after 10:30,’ Lawrence told reporters.

Last Wednesday, Lawrence, was released on GUY$100,000 bail after police laid two new charges arising out of the disputed elections.

Lawrence has been charged with two charges of conspiracy to defraud, one for the general elections and another for regional elections. The former health minister was granted GUY$50,000 bail on each charge.

Her attorney, Nigel Lawrence told reporters that the Director of Public Prosecution (DPP) Office had indicate it was not yet prepared to proceed with the matter which has since been adjourned to December 9.

On August 24, Lawrence was placed on GUY$100,000 bail in relation to a private criminal charge filed against her by PPP/C member and current Minister of Culture Youth and Sport Charles Ramson Jr.

The opposition coalition has accused the People’s Progressive Party/Civic (PPP/C) government of using the police force to unleash psychological warfare against the opposition.

Police have also charged the Chief Elections Officer, Keith Lowenfield, with three counts of misconduct in public office and three charges in relation to forgery. He was granted GUY$300,000 bail and will return to court on October 23.

Last month, a case of fraud against Lowenfield was adjourned to October 26 even as one of his attorneys, Neil Boston, insisted that his client had no case to answer and would be seeking a dismissal when the matter is called

Lowenfield is facing charges of misconduct in public office, conspiracy to commit a felony, and fraud arising from the country’s local and general elections that the Guyana Elections Commission (GECOM) said was won by the main opposition PPP/C after a national recount had been undertaken and supervised by a three-member Caribbean Community observer team.