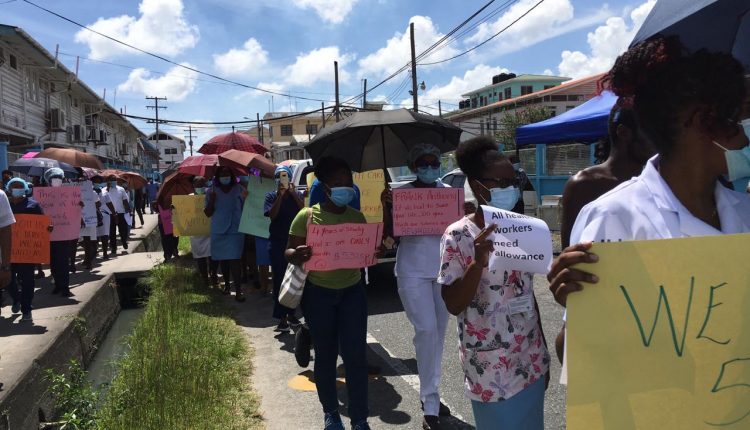 (newsroom.gy) – Attorney General and Minister of Legal Affairs Anil Nandlall has warned of severe consequences including termination of services and criminal charges if nurses continue to illegally protest for better pay and risk allowance.

In a letter sent to President of the Guyana Public Service Union (GPSU) Patrick Yarde, the Attorney General said: “…unless these protest actions cease immediately and the procedures outlined by the law are invoked, the government will have no alternative but to consider certain options, including but not limited to, the institution of criminal charges, dismissal, termination of contracts of employment, suspension of the collective labour agreement with the GPSU and the suspension of the deduction of Union dues for and on behalf of the Union.”

The Attorney General explained that the protest actions by the nurses are not in compliance with Essential Services Arbitration Act and are therefore illegal.

“On evidence available, it is clear that the GPSU has failed, neglected and or refused to disclose to the workers the true, legal and acceptable industrial course of action on this matter, but has chosen instead to mislead these workers into committing, not only violations of the law, but recognized practices in industrial relations, both in Guyana and in accordance with International Labour Organization (ILO) prescriptions,” the Attorney General stated.

The Attorney General further noted that the government will not be negotiating with the Union during this time.

“Needless to say, our government will not offend the time-honoured principle in industrial relations by bargaining under duress.”

The Attorney General further stated that such strike actions are prohibited for “certain defined sectors such as the health sector, is that these services are extremely necessary for the proper functioning of the majority of the populace.”

The Attorney General explained that it is cruel and inhumane to take industrial actions when the country and the world is facing a global pandemic.

“That citizens may die as a result of the GPSU’s actions, cannot have escaped you,” the Attorney General said in the letter to Yarde.

Meanwhile, nurses on the night shift for the Cardiac Intensive Care Unit, which has several critically ill patients, and the Intensive Care Unit of Accident and Emergency of the Georgetown Public Hospital (GPHC) reported sick Friday night as the battle for better salaries and benefits continue.

The nurses, who have been picketing the institution of recent, have vowed to pursue various actions until their demands are met.

GPHC on Friday began gearing up for a crisis should nurses go on strike.

In a notice dated October 2 and sent to all Heads of Department, Director of Medical and Professional Services Dr Fawcett Jeffrey listed some important measures that will be required in anticipation of the strike action including reducing services to only emergencies, suspending all outpatient activities, discharge patients, eliminate visitation and provide home care plan for patients who are not severely ill.