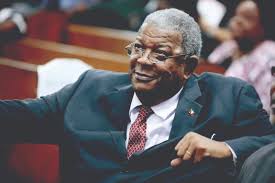 Former prime minister Baldwin Spencer has spoken out to remind the relevant authorities to uphold an agreement regarding the upgrade of the King George V Grounds in Gray’s Farm.

Spencer revealed resources from the Chinese government should have been used as priority to upgrade the grounds after the Gray’s Green Community Center which sits adjacent to the Grounds was built.

“I just want to remind the authorities that the development of the King George V Grounds was basically agreed upon. The understanding was — and it is there in writing, if you go to Public Works and you check these people you will see the drawings and so on there — that after they would have completed that Community Center that the next round for the consideration of grants resources from the Chinese would have been for the development of the King George park,” Spencer said.

The former MP for the area is adamant that this matter should not be brushed aside but made a priority.

“That natter ought not to be shelved,” he added. “It ought to be brought to the fore because there was an agreement in principle that after the completion of the Community Center the next area that would have been given consideration and that would have been developed as part of the Grant Aid program to Antigua and Barbuda would have been the King George V park and I just want this matter to be taken up once again and given effect, and I am making that appeal now. We deserve it in the community. It may have been a long while but better late than never. it should be given priority now.”

He said the upgrade of the facility is needed not only in the community but on a national level for the development of sports.

“Quite frankly, when you look at it, it is something that is needed. An upgrade is needed for the advancement of sporting activities not only for the Gray’s Green community but for Antigua as a whole as having another facility that is at a level that can attract regional and even international sporting activities,” Spencer mentioned.

Although the Minister of Sports Daryll Matthew says he is not aware of such an agreement he is reassuring the public that the park will be upgraded.

He explained that there are some issues that have plagued this upgrade.

“Well I am not aware of the grant in which the former prime minister is speaking but we in the ministry have made it a priority to refurbish the courts and fields around the country. One of the issues with the King George Grounds is the lights on the football field itself. We have given an undertaking to ensure that the field is properly lit. It is the most densely populated area in having produced probably the best athletes and maybe the most athletes in almost every discipline and so we have an obligation and responsibility to ensure that the facilities are in place, but it is just not King George, it is all of our facilities and so while we can’t do it all at the same time, we do have the intent to ensure that it is all done and I don’t want anyone to become suspicious and believe it is an election ploy because every time I come on this program I reiterate that there are some complexes that are finished and some that are waiting to be done,” Matthew said.