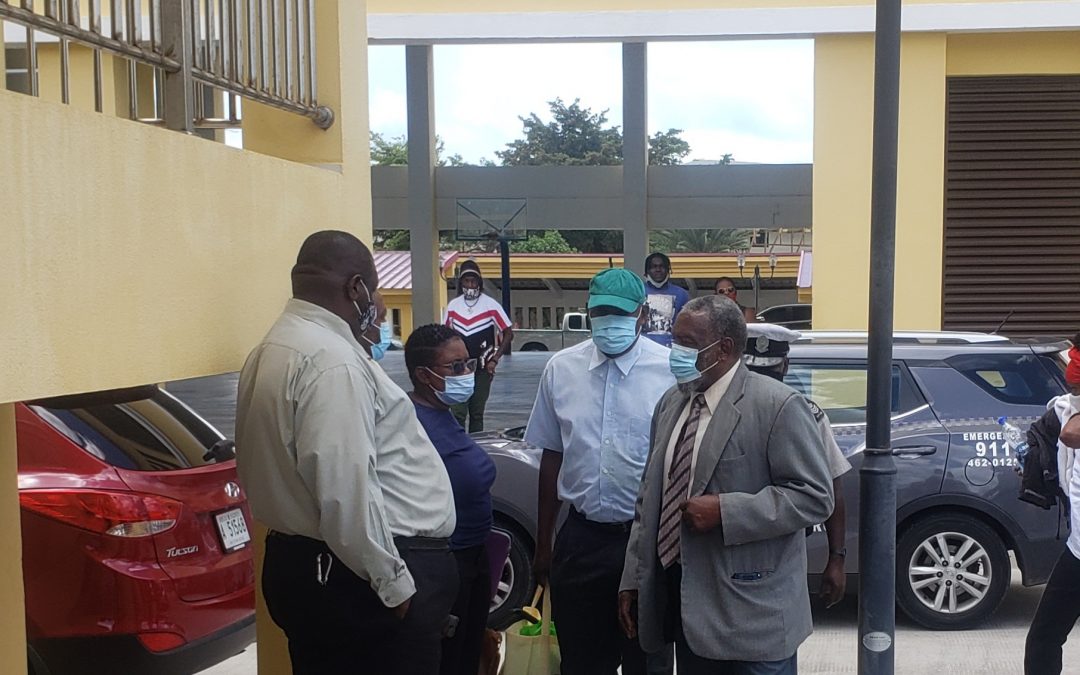 Fire officer Glenroy Weekes (green hat) at St John’s Magistrates’ Court yesterday. Weekes is accused of stealing thousands of dollars from XPZ Supermarket as his colleagues battled the flames which gutted the store on Tuesday.

Armed with two legal representatives, the senior police officer who allegedly stole a large sum of money from the XPZ supermarket, which was destroyed by fire on Tuesday, was remanded to Her Majesty’s Prison after he appeared in court yesterday.

This was as a result of a June 1 report made where Weekes, a fireman, was said to have stolen US$3,000 along with personal items from the supermarket on Sir Sydney Walling Highway while his colleagues were attempting to put out the flames which engulfed the supermarket.

During their investigation, the police recovered an unlicensed firearm and ammunition at his home.

When the officer with 40 years’ service appeared in St John’s Magistrates’ Court yesterday, he was represented by attorneys Leon Symister and Lawrence Daniels.

Symister took the lead and asked that the entering of a plea be put off until disclosure of the case file is complete.

He asked for it to done within 14 days saying that since they had enough evidence to charge his client it shouldn’t take long to be ready for a possible trial.

The prosecution instead requested a month to issue the file.

Magistrate Conliffe Clarke agreed to meet them in the middle and instead gave the prosecution 21 days.

Symister agreed and then went on to speak on the issue of bail.

He noted that while the magistrate has no jurisdiction to grant bail for the firearm and ammunition charges, he can give bail for the offence of larceny.

However, the magistrate stated that that “would be moot” because he believes “it is best and most practical to make the application for all the charges in the High Court”.

Daniels then rose to his feet to ask the magistrate to submit a “favourable statement” to the Superintendent of Prisons so that Weekes can be housed at the Police Headquarters for safety reasons.

The magistrate responded, saying “the court is of the opinion that on a balance of administration of justice as well as the personal safety of the defendant, the superintendent should use his best discretion on this matter”.

The case was then adjourned until September 6.

According to the police, Weekes has been suspended pending the determination of the charges against him.

The force said it maintains, however, that a person is innocent until proven guilty.

They added that the “police administration takes these allegations seriously as they do not represent the core values of the Royal Police Force of Antigua and Barbuda and reassures the public of its commitment to displaying professional and ethical behaviours as the force serves the community”.