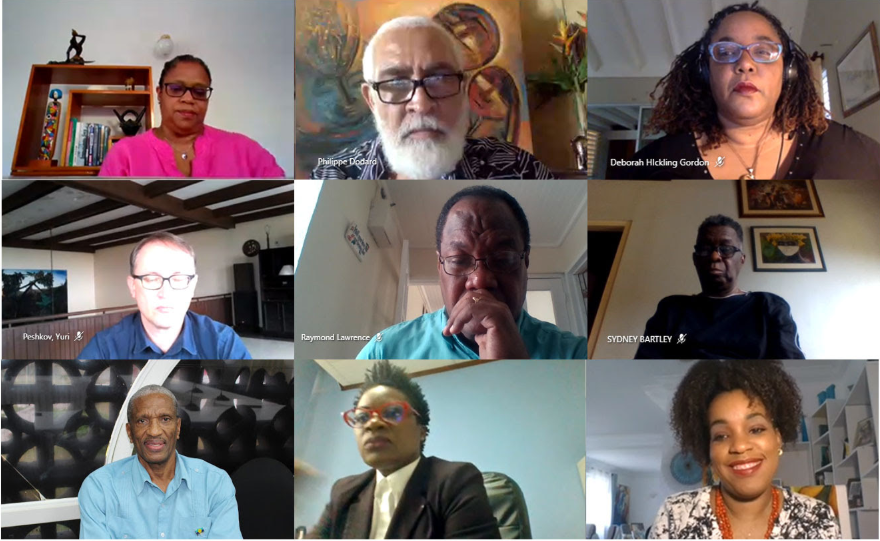 (DNO) – Assistant Secretary-General in charge of Human and Social Development at the CARICOM Secretariat, Dr. Douglas Slater, told regional culture stakeholders from government and the artistic community that their input and ideas were crucial to post COVID-19 resilience.

He was speaking at the beginning of the ‘First Regional Dialogue on Culture in a COVID-19 Environment’ which was held virtually on Wednesday.

“The Region looks to you as an important stakeholder to provide it with your inputs and ideas. If there was ever a time that we need culture and creativity to address our challenges, it is now,” Dr. Slater opined.

He said the meeting was timely and addressed an issue that was very relevant to the Region.  According to him, COVID-19 had upended almost every aspect of CARICOM’s economic and social development. He said Member States had a tremendous challenge ahead in addressing the upcoming hurricane season, given existing vulnerabilities.

He encouraged the representatives of the creative industries to prepare to demonstrate the importance of culture as an element in the lifeblood of society, noting that there was a critical role for creatives to play in the rebuilding of a resilient Caribbean Community.

In his remarks, Dr. Slater also gave an overview of the actions taken by the CARICOM Secretariat since the advent of COVID-19 in December 2019. He outlined that the CARICOM Secretariat had been monitoring the development of the virus almost daily. He also disclosed that the Secretariat had been working closely with the Caribbean Public Health Agency (CARPHA) and the Caribbean Disaster Emergency Management Agency (CDEMA) along with other Regional stakeholders and partners from the onset. He noted that there had also been significant engagements with the air and cruise line industries.

He explained that other sectors were also engaged, through special meetings of the various regional Councils noting that “COVID-19 impacted on every aspect of the Region’s economic development.” Some of the areas that received the attention of special meetings included agriculture, trade, education, security and health. According to Dr. Slater, the focus was on planning for worse case scenarios and the exploration of opportunities to emerge a more resilient Region.

“It is reasonable to say that we had astute political and technical leadership in CARICOM to handle this. The figures demonstrate this,” Dr. Slater stated.

He said the Region had been able to manage this first outbreak of COVID-19 well, relative to the international environment and more developed and endowed countries.

“We recognised very early that we have limitations in our health care systems and that we must heed the advice of our scientists and medical personnel and I want to place on record our gratitude to health care workers as well as the regional universities,” he said.

He also commended CARPHA and CDEMA for what he referred to as yeoman service to the Region.

He revealed that a Regional Public Health Protocol was now being developed to guide the reopening of the Region. According to him, all the components may not be ideal to all Member States and he expected that some may not use it in its entirety. But the idea was to have a baseline to be used.

“We expect, depending on the situation in particular Member States to have some adaptation of that protocol,” he said.

During the meeting, participants gave an overview of the situation in their countries as it relates to culture, particularly regarding cancelled events and festivals. Several countries and regional agencies, notably the Caribbean Development Bank and Caribbean Export, indicated that stimulus packages were available or in development to assist artists and cultural workers who are facing economic challenges during this period.

The meeting made a number of recommendations for follow-up action including addressing roadblocks to artists monetising online content; strengthening industry associations in all sectors across the Region; establishing content quotas to mandate the use of local music and film on national media platforms; data collection on the impact of the pandemic on the sector; analytics of on-line consumption and increased registration of artists to facilitate support.

The meeting acknowledged the increased use of online platforms for performance, festivals and events and recommended that CARIFESTA XV scheduled for 2021 in Antigua and Barbuda, serve as catalyst and game-changer in a new approach to presenting festivals in a mixed on and off-line format and to jump-start the festival economy.  There was also a call by creative practitioners for a harmonised regional incentives regime and a moratorium on duties and charges on inputs to the sector for a specified period.

The meeting was attended by representatives from Ministries of Culture from 19 Member States and Associate Members, stakeholders who are industry leaders in a variety of areas, representatives of the Caribbean Development Bank, Caribbean Export and UNESCO Cluster Office for the Caribbean, along with the staff of the CARICOM Secretariat.