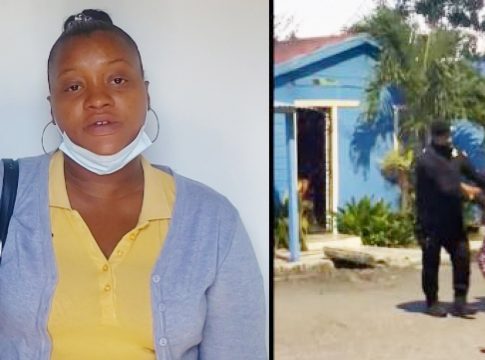 A woman, who was slapped with eight charges following the circulation of a video which showed her struggling with a police officer, has issued a public apology to the law enforcement official.

The video, which made the rounds on social media in July, showed the woman — Melissa Benjamin of Dominica — and the police officer involved in a struggle.

The matter raised the ire of the public who thought that the officer was not handling the matter correctly and that he was using excessive force.

Benjamin, who is employed as a cleaner at Greenbay Primary School, was ordered by the magistrate to issue an apology in a video that will be posted on social media.

After she was slapped with the eight charges back in July, the trial began in the St John’s Magistrates’ Court court on Thursday.

She admitted during the trial that she lied on Constable Esprit, and added that she had also apologised to him previously while they were at the police station.

An independent witness who was standing at the side of the road during the incident stated that he heard the officer ask Benjamin three times to put on her mask properly, but she started to misbehave and curse.

Benjamin returned to court yesterday, and in presence of Constable Espirit, she apologised to him for saying that he had interfered with her.

“On the 16th of July at about 6:25 pm, me and officer Espirit had an engagement on the streets. Officer Espirit did not do anything wrong. He did not disrespect me, he only told me to fix my mask and I reacted to that, so I have come on the air to apologise to Mr Espirit to let him know that he never disrespected me, he never troubled me, he never did anything wrong and I was guilty for all charges,” Benjamin stated.

She was found guilty of all but one of the charges which included failing to wear a face mask, disorderly conduct by making noise, failing to give her name and address, using indecent language, battery and escaping lawful custody.

“I give you all the wrong. You caused the incident and it is atrocious what happened. The ultimate sin you did was to say the man interfered with you. I don’t know how y’all sleep at night,” Chief Magistrate Joanne Walsh told Benjamin during the sentencing. She added that the video did not show the whole incident.

The Chief Magistrate even indicated that the officer, Constable Esprit, had been transferred to the prison probably because he was misjudged before the matter even ended.

An emotional and pregnant Benjamin was fined a total of $1,600 for seven of those charges — $100 for using indecent language; $200 for disorderly conduct; $500 for failure to wear a mask; $100 for escaping custody; another $100 for failing to give her name and address; and $500 for resisting arrest.  For the charge of battery, however, she was reprimanded and discharged.

Failure to pay the fines by December 30 will result in Benjamin spending six months at Her Majesty’s Prison.