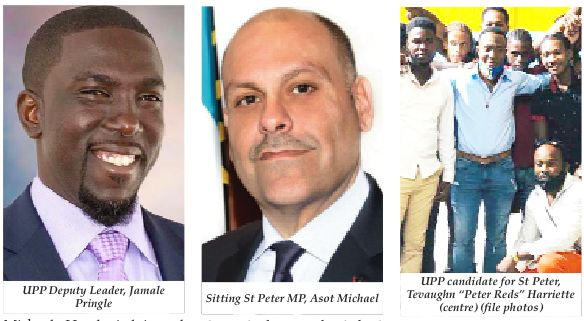 The deputy leader of the opposition United Progressive Party (UPP), and the party’s newly-installed candidate for St Peter, have both refuted allegations that the sitting Member of Parliament for St Peter financially supported Tevaughn “Peter Reds” Harriette’s campaign.

According to a press statement from Harriette, Asot Michael reportedly stated that he had supported Harriette’s candidacy by paying for persons to register with the UPP St Peter branch, in order to vote for the national footballer.

Voice notes circulated on social media – which have not been independently verified – also appear to reveal Michael pledging such.

Harriette denied those allegations in the same statement, saying he had never requested, nor received, any money from Michael to register any individual with the UPP for Thursday night’s primary in which he secured a landslide victory.

“He said he did not receive any money from Mr Michael. He denied it and said he didn’t have any discussions,” Pringle said.

“As a matter of fact, Mr Michael even went to his home with money the other night and they ran Mr Michael out of their home. I don’t know about towards football because Mr Harriette is an integral part of the Parham football set-up so I cannot speak to that aspect of it because I said to him personally, we are not in any way going to tell you what and how to do, but when it comes to the UPP, we have a standard to maintain.”

Pringle, who is also the Leader of the Opposition in Parliament, and the MP for All Saints East & St Luke, also claimed that Michael had contacted him personally, pledging support to Pringle’s own candidacy, if he were to prevent Harriette from participating in the primary.

Pringle continued, “I am not about money. I cannot be bought. My pride and joy is the United Progressive Party and I am putting MP Michael and all the others who think that because they have some financial clout in this country, everybody is going to fall and drop to their knees at their beck and call; not Jamale Pringle.

“So, he can continue to spread propaganda, the people of Antigua and Barbuda understand that my role in this country is not about riches but is about empowering people and changing the lives of the majority of Antiguans and Barbudans.”

Pringle claimed Michael was trying to destabilise the UPP. He suggested Michael was feeling the pressure due to Harriette’s popularity among young constituents.

“We have to understand that we cannot allow MP Michael to control our narrative and the people of Antigua and Barbuda. He is feeling the pressure up in St Peter because the young man is creating a stir where he has a following of young people who are totally fed up with the handout mentality,” Pringle said.

“What has been happening through the few weeks leading up to this is that when the MP calls people he has been saying things that are not true, to create confusion within the UPP because he understands that anything said about the UPP, social media runs with it and it discourages people. We are not going to allow him to do that,” Pringle added.

Repeated efforts to reach Michael for a response were unsuccessful.