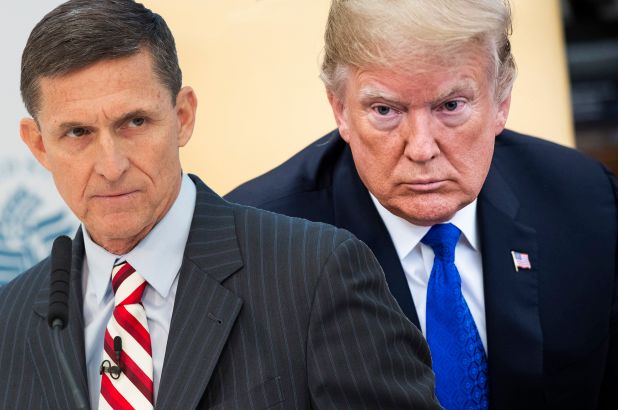 The Justice Department moved Thursday to drop charges against President Trump’s former national security adviser Michael T. Flynn, who pleaded guilty to lying to the FBI about his Russian contacts during the presidential transition.

The unraveling of Flynn’s guilty plea marked a stunning reversal by the Justice Department in its case against the retired three-star Army general, who was convicted in the course of special counsel Robert S. Mueller III’s investigation of Russian interference in the 2016 election.

In court documents filed Thursday, the Justice Department said “after a considered review of all the facts and circumstances of this case, including newly discovered and disclosed information … the government has concluded that [Flynn’s interview by the FBI in January 2017] was untethered to, and unjustified by, the FBI’s counterintelligence investigation into Mr. Flynn,” and that it was “conducted without any legitimate investigative basis.”

It is highly unusual for the Justice Department to seek to undo a guilty plea, and comes just months after Attorney General William P. Barr pressed prosecutors in another of Mueller’s cases to soften their sentencing recommendation for the president’s friend and former political adviser Roger Stone.

Flynn was one of the first and highest-ranking Trump aides to cooperate and be convicted in Mueller’s investigation. He pleaded guilty in December 2017 to making false statements about his contacts with Russia’s ambassador to the United States before Trump had taken office and as the FBI was attempting to ascertain whether anyone in Trump’s campaign had coordinated with Russia to influence the election’s outcome.

However, his case became one of the most bitterly contested after Mueller’s probe ended in March 2019. Flynn’s new defense lawyers began moving to void his conviction, alleging he was the victim of a partisan conspiracy by prosecutors, federal investigators and even his initial attorneys. His new defense team also alleged he was insufficiently represented by one of Washington’s most prominent law firms, Covington & Burling, when he entered his guilty plea.

Barr in January directed the U.S. Attorney Jeff Jensen of St. Louis to review the case’s handling by the federal prosecutor’s office in Washington, which took over Mueller cases last year, and Jensen made the final recommendation.

“Through the course of my review of General Flynn’s case, I concluded the proper and just course was to dismiss the case,” Jensen said in a statement. “I briefed Attorney General Barr on my findings, advised him on these conclusions, and he agreed.”

The retreat could be a political windfall for Trump, who last month announced on Twitter that he was “strongly considering a Full Pardon” for Flynn, whom Trump removed just weeks into the new administration. The Justice Department’s decision also means that the president won’t have to become personally involved in the Flynn case to get the outcome he desired.

Speaking to reporters, Trump said Thursday that he had been informed of the Justice Department’s decision. “He was an innocent man,” the president said. “Now in my book he’s an even greater warrior.”

Thursday’s filings suggest a handful of former senior FBI officials are to blame for a meritless pursuit of Flynn. The filing mentions internal communications between former FBI deputy director Andrew McCabe, former case agent Peter Strzok, and former FBI lawyer Lisa Page — all of whom have faced criticism for other conduct — and argues that those conversations show the FBI investigation of Flynn, dubbed Operation Razor, should not have existed at all.

“The frail and shifting justifications for its ongoing probe of Mr. Flynn, as well as the irregular procedure that preceded his interview, suggests that the FBI was eager to interview Mr. Flynn irrespective of any underlying investigation,” the new filing contends.

He said the FBI had initially decided to end the investigation before learning of Flynn’s phone calls with the Russian ambassador, and before the administration had denied what was said on them.

“The idea that this was an insufficient basis to continue a counterintelligence investigation whose purpose was to discover whether the Trump Campaign colluded with the Government of Russia — a country which had just attacked the United States to help get Trump elected — is preposterous,” he said.

“This is a sad day for the rule of law in America.”

The move is likely to intensify concerns within and outside the Justice Department that Barr and its politically appointed leadership is intervening in sensitive cases to help the president’s friends and political allies.

The Flynn motion must be reviewed by a judge.

Flynn, 61, was a senior Trump campaign foreign policy aide who went on to serve 24 days as national security adviser, the shortest tenure on record. He was fired from the White House in 2017 for misstating the nature of his contacts with then-Russian Ambassador Sergey Kislyak to Vice President Pence, senior White House aides, federal investigators and the news media.

In his plea, Flynn admitted he was in touch with senior Trump transition officials before and after his communications with Kislyak. The pre-inauguration communications with Kislyak involved efforts to blunt Obama administration policy decisions on sanctions on Russia and a United Nations resolution on Israel, according to his plea. He also admitted misstating his lobbying work for the government of Turkey.

Flynn faced up to a five-year prison term under the charge, but in exchange for his “substantial assistance” to prosecutors investigating the Trump administration, Mueller’s team initially recommended probation as a possible sentence.

Once Mueller’s probe ended, however, Flynn changed defense teams. He began accusing the FBI prosecutors of manufacturing the charges against him, coercing him into admitting he lied and withholding evidence.

U.S. District Judge Emmet G. Sullivan rejected those arguments. But in January, Flynn moved to take back his plea. Flynn claimed that he was in fact innocent and that was a victim of ineffective defense counsel as well as unscrupulous prosecutors who demanded his false testimony against his ex-business partner.

Prosecutors have previously rejected any government misconduct in his case. They argued his allegations had no relevance to the sole charge to which he pleaded guilty, and the main focus of that charge, lying about his Kislyak contacts.

The filing came one day before a Justice Department deadline to answer defense allegations of misconduct prompted by the Barr-ordered review, and coincided with the withdrawal from the case of its lead prosecutor, veteran national security prosecutor Brandon L. Van Grack.

In recent days, Flynn had elevated attacks on law enforcement, citing newly unsealed documents turned over by Jensen’s review to the defense showing that the FBI was about to close the investigation into Flynn in early 2017 until new evidence prompted them to keep it open.

Flynn also seized on notes turned over in the review showing FBI officials discussed in advance how to handle the January 2017 interview with Flynn about his contacts with Russia’s ambassador to the United States before Trump took office.

The notes show that before the Flynn interview, FBI officials discussed the possibility he would lie to them, given that he had already apparently denied to other White House officials that he’d discussed sanctions against Russia weeks earlier in phone calls with then-Russian Ambassador Sergey Kislyak.

“What is our goal?” the notes said. “Truth/admission or to get him to lie, so we can prosecute him or get him fired?” The note said the FBI should “protect our institution by not playing games.”

Trump wrote and retweeted a flurry of messages sympathetic to Flynn last week, saying, “What happened to General Michael Flynn, a war hero, should never be allowed to happen to a citizen of the United States again!”

At a news conference, asked if he rehire Flynn, Trump said, “I would certainly consider it, yeah, I would,” adding, “I think he’s a fine man.”

Separately Flynn has also claimed his former attorneys were “in the grip of intractable conflicts of interest” and “irreparably tainted” his original plea. Flynn had admitted that he knowingly lied to the Justice Department in foreign lobbying disclosure filings about whether he and his former business partner, Bijan Rafiekian, had acted as agents for the Turkish government. The firm had represented Flynn in filing the Foreign Agent Registration Act forms he is accused of lying about. Flynn’s new defense claims it obscured its own errors while representing Flynn in his criminal case.

The external review came after a dramatic shake-up in leadership and questions over top Justice Department leaders meddling in the prosecution of the president’s friends and foes. Barr arranged for a top aide at the beginning of February to replace the former U.S. attorney for D.C., who oversaw both Flynn’s case and the case of Trump’s longtime political confidant Roger Stone. The leadership change came as Trump publicly rebuked the Justice Department for its “very unfair” treatment of Flynn and Stone.