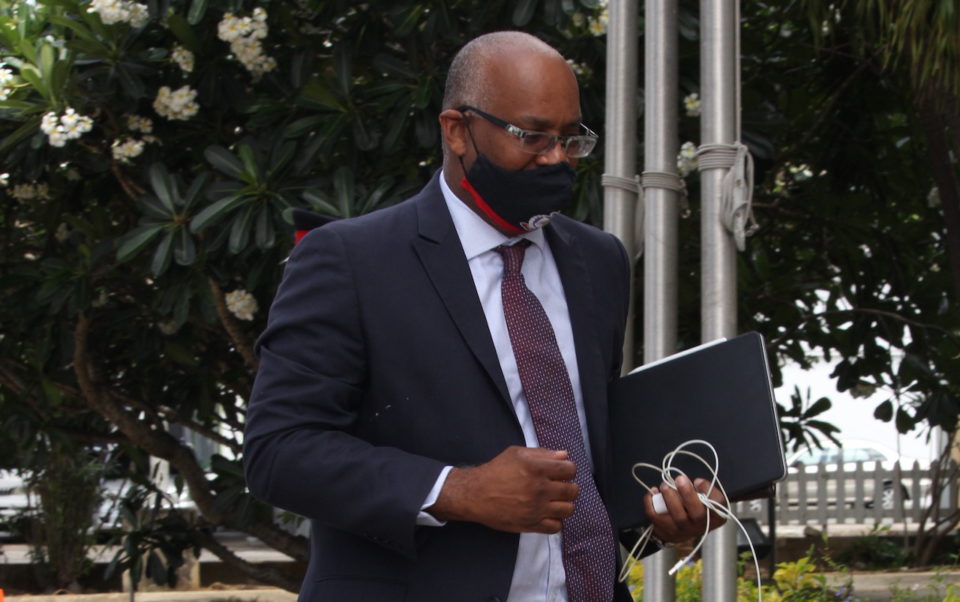 (Barbados Today) – Attorney General Dale Marshall tonight allowed an exemption from restrictions under the COVID-19 pandemic to organisers of a small protest march near the US Embassy over the extrajudicial killing of an African-American man by a white police officer in the US.

But in sharp contrast to similar demonstrations in the US and around the world numbering throngs of thousands, only ten people in masks, armed with hand sanitizer and practising social distancing will be seen at three locations demonstrating their solidarity with the struggle for civil rights on Saturday.

In a letter to the organisers, AG Marshall said: “I grant such exemption from the COVID Directive (No.6) as is needed to permit your protest march/picket to proceed, subject to your obtaining hereafter the permission of the Commissioner of Police for the same to be held.

“In your correspondence you stipulated ten persons will participate in the event and the exemption is granted limited to that number of participants. Strict physical distancing, the wearing of masks and the sanitizing of placards and other materials, and bullhorns and other devices will be mandatory.”

The application for the march was punted to the Attorney General after Police today stopped short of granting permission for the demonstration, claiming their hands are tied by the COVID-19 pandemic emergency restrictions.

The decision, communicated by telephone by Commissioner of Police Tyrone Griffith, prompted the organisers to pan an appeal to Attorney General Dale Marshall for permission.

Commissioner Griffith was mulling an application for a picket near the US Embassy on Saturday, a bid to show solidarity with Americans who are fighting against racism in the wake of an extrajudicial killing of an African-American man, George Floyd, by a white police officer in Minneapolis, Minnesota.

The demonstration is being organized by the Caribbean Movement for Peace and Integration, the 13th June 1980 Movement and noted attorney-at-law Lalu Hanuman.

In a letter to the AG, lawyer Hanuman said: “[Commissioner] Griffith tells me that while he has no objection to the said picket, the EMERGENCY MANAGEMENT (COVID-19) CURFEW (NO. 6) DIRECTIVE 2020, prohibits him from granting such permission, and hence that I should refer the matter to yourself for permission.

“I had sought permission under paragraph 6 of the above Directive, namely: “Meetings may be convened for the purpose of conducting business at which no more than ten persons shall be present and physical distancing shall be observed”.

“The above-quoted paragraph 6 does not state “commercial business”, but rather just “business”. The proposed Picket is in furtherance of the fundamental “business” of promoting human rights. Thus arguably it fits directly within the said paragraph 6, however, if it is deemed to be not so,kindly use your good offices to grant the said permission, as it is incumbent in any democratic society that the right to peaceful protest, albeit with physical distancing as per the present, is always permissible.

“Further, given that the proposed location is a three-way location, this is to amend the attached request such that the requested permission extend to the gathering of ten persons per location – (thirty persons in total) – all practising physical distancing.

According to David Denny, General Secretary of the Caribbean Movement for Peace and Integration, said: “This is a very important protest in America because we are also joining with the world who are condemning the killing Of George Floyd by the United States of America police system.”

Denny said the organisers are also calling on Caribbean governments to take a position on the issue given the potential impact on Caribbean diaspora.

“It is not only affecting the family of George Floyd, but it is affecting all black people in the United States of America and this means that all our Caribbean nationals will be affected by this type of police brutality and racist action that is playing itself out in the United States,” he said.

Tens of thousands of people have demonstrated, mainly peacefully, across the United States for a ninth night following Floyd’s death

George Floyd died on May 25 after being arrested by police outside a shop on suspicion of passing a counterfeit $20 bill to buy food. Footage shows a white officer, Derek Chauvin, kneeling on Floyd’s neck for several minutes while he is pinned to the floor. Floyd is heard repeatedly saying ‘I can’t breathe.’ He was later pronounced dead at hospital.

Demonstrators have taken to the streets not only to express their outrage at the treatment of Floyd but to condemn police brutality against black Americans more widely.

Chauvin was today slapped with an upgraded charge of second-degree unintentional murder while three other officers, previously uncharged, face counts of aiding and abetting murder and manslaughter.

There have also been similar protests globally, including the UK, Australia, Germany, Italy and Canada.

In their letter to police, the local groups proposed the picket to be held on Saturday at the junction of Wildey Road and Pine Plantation Road, adjacent to the American Embassy from 11 a.m. to 1 p.m.

“We estimate that the number of persons attending will be no more than ten as per the Emergency Management (COVID-19) Curfew (No.6) Directive, 2020… At all material times, participants will be on the pavements and maintain physical distancing, “ the letter said.

In a separate development, USAmbassador Linda Taglialatela in a post on an Instagram account of the US Embassy said she supports the stand taken against racial injustice, adding that the US Government will hold those accountable while supporting free speech and peaceful assembly.

Taglialatela declared: “The responses to the tragic death of George Floyd by Americans and people worldwide, including in the Caribbean express pain, anger and frustration towards racial injustice in the United States.

“Although our nation was founded on the principles of life, liberty and the pursuit of happiness, racism too is a part of our history and has yielded painful results. We must do better. Our democracy will rise to this challenge.

“The struggle to attain and uphold justice continues. It is embodied by the peaceful demonstrators across the nation and has the steadfast support of all of us at the US Embassy, black and white, American and Caribbean.”