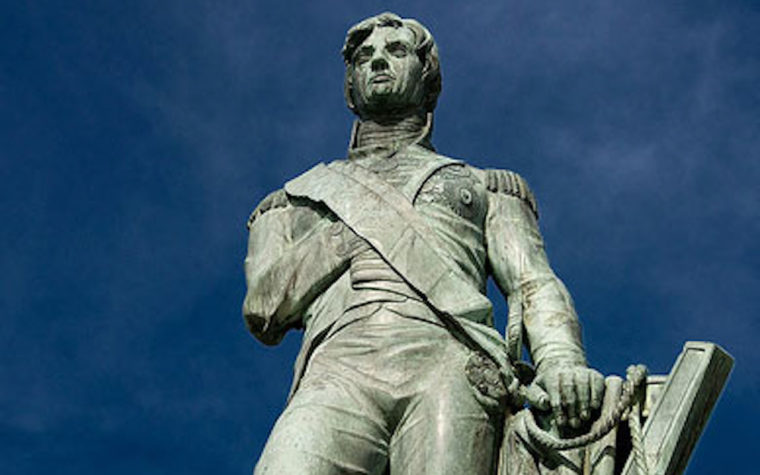 (Barbados Today) – Prime Minister Mia Mottley favours the removal of the statue of Lord Nelson from National Heroes Square but declares it’s a decision that rests with Barbadians.

“This is a Government that works with people and consults people. I will strongly encourage Barbadians to follow me on this issue when we have the conversation.

“I like you believe that National Heroes Square should be the home of a National Hero of Barbados,” she told Barbadians living abroad, who participated in a more than three-hour-long discussion on Zoom – We Gatherin’ 2020- the Online Edition on Saturday evening.

Her comments came hours after the Caribbean Movement for Peace and Integration led a strong protest in Heroes Squares calling for the removal of the statue of the British naval commander and slavery sympathizer erected in March 1813.

An online petition calling for the removal of the statue led by former journalist Alex Downes has already garnered more than 10, 000 signatures.

Mottley reminded the participants that more than a decade ago she led the call for the removal of the controversial statue as Minister of Culture.

She noted that after much push back then, a committee set up to consider the matter proposed the creation of a naval maritime museum by the Blackwoods Screw Dock to house the statue and this could be still considered.

“The notion of a naval museum, a maritime museum- was very much on the cards I think that is where we are likely to go back after consultation, “ Mottley said.

Pointing out that significant development work by the Screw Dock was in the pipeline she stressed that the consultation would also have to examine, “ whether the museum [the Barbados National Museum] is prepared and can take it and what are the costs, and what are the opportunities to relocate it.

“That now has to be investigated as part of the conversation. But the Government is not going to definitively state a position without appropriate consultation, “ the Prime Minister maintained.

Meanwhile, Minister of Sport, Youth and Culture John King cleared the air on reports that he was not on board with the removal of the controversial statue.

King, who said he had only rejected the notion that the statue should be thrown into the water, insisted his comments were taken out of context.

“So there was no push back from anyone about the idea of removing the statue from Heroes Square.

“ We understand fully well what Nelson would represent and how people feel about it but really and truly as a mature society and mature people they are certain ways that we have behaved in the past as responsible citizens, “ he said.