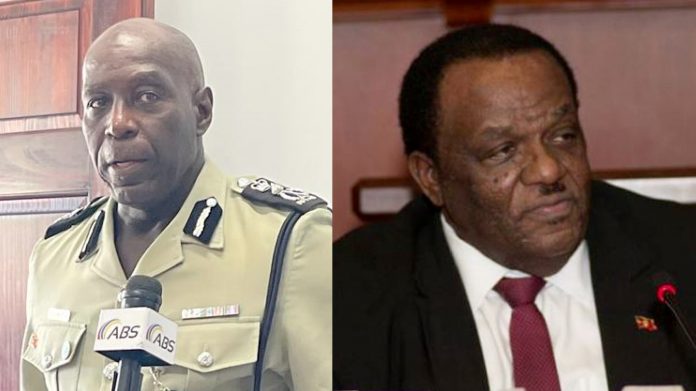 The Police Welfare Association (PWA) has lodged a scathing rebuke of the police hierarchy and the government for their apparent lack of attention to the needs of the police force.

In 2019, the PWA took the hierarchy to task over a number of issues to include unsanitary working conditions at the various police stations across the island, the lack of uniforms, accessibility to housing and lands, medical insurance and risk allowance for officers.

And almost three years later, several of these issues, like risk allowance and medical insurance, despite recent commitments by the Minister of Justice and Legal Affairs, Steadroy “Cutie” Benjamin, have yet to be resolved.

Although commendations were given recently for the newly refurbished Parham Police Station, Chairman of the PWA, Corporal Marylyn Harris, while speaking exclusively to Observer media, referred to the structure as a “slap in the face” to her body, as the proposed plans that were agreed upon were not carried out.

“We would have negotiated for new stations to be built at Parham, All Saints and Bolans. Barbuda as well, because Barbuda has been without a station since 2017 after the passage of Hurricane Irma. However, at those meetings, we were told and assured that we will get our stations built. From day one, we were against adding a piece on the barrack room at Parham Police station for us to operate. We never negotiated for that. We never negotiated for anybody from public works to add any plywood to a barrack room and call it a police station. That is more than a slap in the face to the police, that is total disrespect,” Harris said.

Harris added that there is still a lot to be done with the Bolans and Barbuda Police Stations, as it is unjust for the officers to be confined to sharing a space with other police and fire stations for so many years.

The same rhetoric was given to the newly-constructed Maple Southwell-Walter Medical clinic at the Police Headquarters.

“We never negotiated for a clinic, what we negotiated for was medical insurance, and from 2019 up to today’s date, we haven’t gotten our medical insurance. Police have no insurance. The public must know these things because we are hurting so much, people will never understand, but at the same time we continue to work because we have to; we must protect the nation of Antigua and Barbuda.

Police Commissioner Atlee Rodney had however announced at the handing over ceremony of the Parham Police station that the focus will now turn to the Bolans Police station.  Whether or not they will be demolishing the old building or just refurbishing that structure is not clear.

As with many residents in the country, the issue of running water and electricity is plaguing officers, and according to Assistant Treasurer Constable Julian DeCastro, those are “unacceptable conditions for lawmen” who work regular 12-hour shifts.

He insisted that it is disrespectful to ask officers to work in these conditions.

The 12-hour shifts, the PWA reiterated, is still another area of concern that has not been addressed.

Nevertheless, 2nd Vice Chairman with responsibilities to the Fire Department and appointed Treasurer, Corporal Sylvester George, have called on the hierarchy to meet them halfway, as the morale in the force is at an all-time low.

“Our members need to be looked after. That will bring the morale of the force back up, along with other things, but start by looking after the members. Look about their needs which were promised to them when they joined this organisation. That is all we are asking, look about them. We are asking the powers that be to just do that for us please. Please, give us what we are deserving of,” George pleaded.

While the body has not announced protest action over the outstanding grievances, the executive members are saying, “enough is enough.”

Attorney General Steadroy “Cutie” Benjamin was not available for comment.