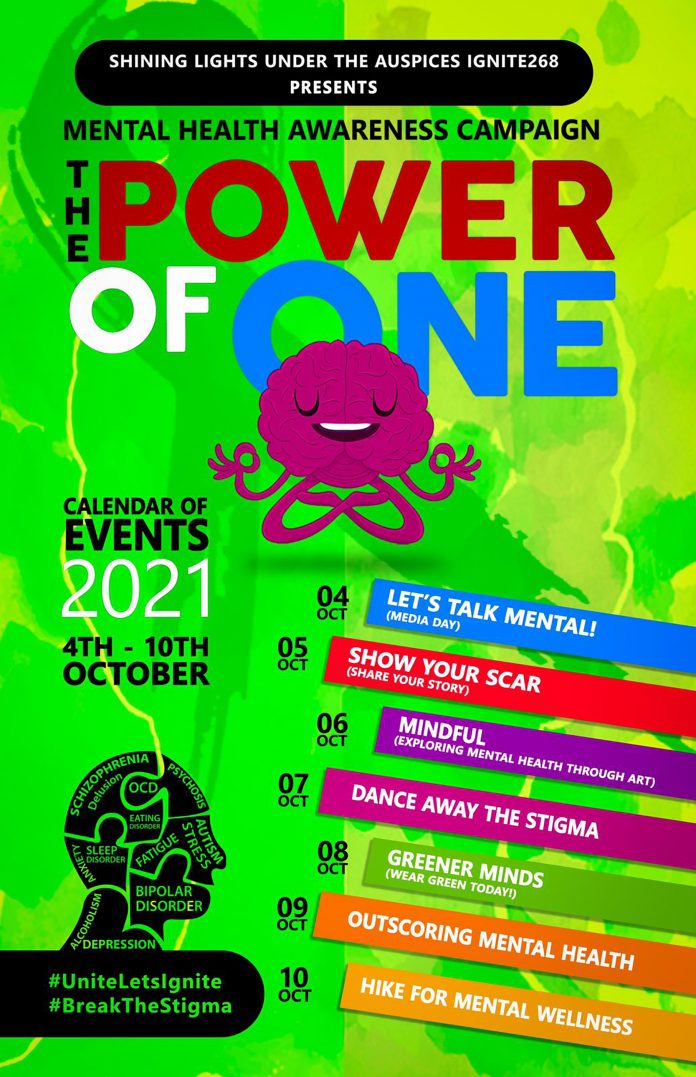 With October being Mental Health Awareness month and with the ongoing perils that continue to threaten the mental health of residents in the country, one local charity is hoping to shine some light on the matter during a week-long campaign.

Under the auspices of Ignite 268, the Shining Lights organisation will be embarking on its Mental Health Awareness Campaign and will be urging Antiguans and Barbudans to ‘#UniteLetsIgnite and #BreakTheStigma’ surrounding Mental Illness in Antigua and Barbuda.

Founder and CEO Briana Lewis and her team members are no strangers to the cause, having made several other efforts in the past on the issue on a smaller scale, but this year a special effort is being made to shine a brighter light on mental health.

The campaign will commence today with ‘Let’s talk Mental ‘ Media Day and will end on Sunday October 10 — World Mental Health Day. The week of activities will be executed under the theme, ‘The POWER of ONE’.

“Growing up, it used to pain me especially going to an all-girls school and seeing the struggles they used to go through and when I thought of the facilities around us, there aren’t a lot, and even the main one that is supposed to take care of persons suffering with mental illnesses, it is devastating. There’s a lot more that can be done and for some reason, it is not an area that government puts much focus on. I have wanted to do something like this for a few years. In 2017, I wasn’t here but then Covid happened in 2020 and we did something on a small scale, but having the platform from Ignite268 events and persons knowing about Madam Ignite, I thought, why not use my platform to do what I always wanted to do? I decided even it is five persons that jump onboard this time around, I am going to do it and now, we have over 75 persons wanting to support,” Lewis said as explained the motive behind the campaign.

“In addition to the pressures faced in daily life, we are currently coping with the effects of Covid-19. While some citizens are not affected, others have been severely impacted. From the loss of jobs to extended curfew hours, it has all been quite a strain on the mental health of our citizens. As a result of a lack of resources, residents are not aware of the importance of our mental health. It is safe to say, our mental health is more important than our physical health because if we are mentally strong, it aids in physical strength which all contributes to an individual’s wellbeing,” she added.

Today the group will appear on the various radio and television programmes for ‘Let’s Talk Mental’ where they will be discussing the importance of good mental health to raise awareness.

On Tuesday, the Show your Scar event will take place where victims will be able to share their stories with the public via the group’s social media. Persons interested in telling their stories are being encouraged to reach out to the group via Instagram @_shining.lights, by email: [email protected] or by calling 782-5558.

On Wednesday, participants will explore mental through art with the event ‘Mindful’.

“This is where creatives will basically have the opportunity to express themselves because you know, art is something that is used to relieve pain, anxiety, stress and cope with everyday living. When I say creatives, I don’t just mean artistes, but graphic designers, photographers, dancers, singers and musicians will have the opportunity and all this will be via social media,” Lewis explained.

Twenty-four hours later, via Zoom, persons can join in to ‘Dance Away with the Stigma’ with kerobics while, on Friday, residents are being encouraged to wear green in support of mental wellness. Those interested in purchasing shirts can do so as well from the group.

On Saturday, via Zoom, tips on mental health and other brief bits of advice will be given by a physciatrist, while on Sunday, a hike for mental wellness will be held.