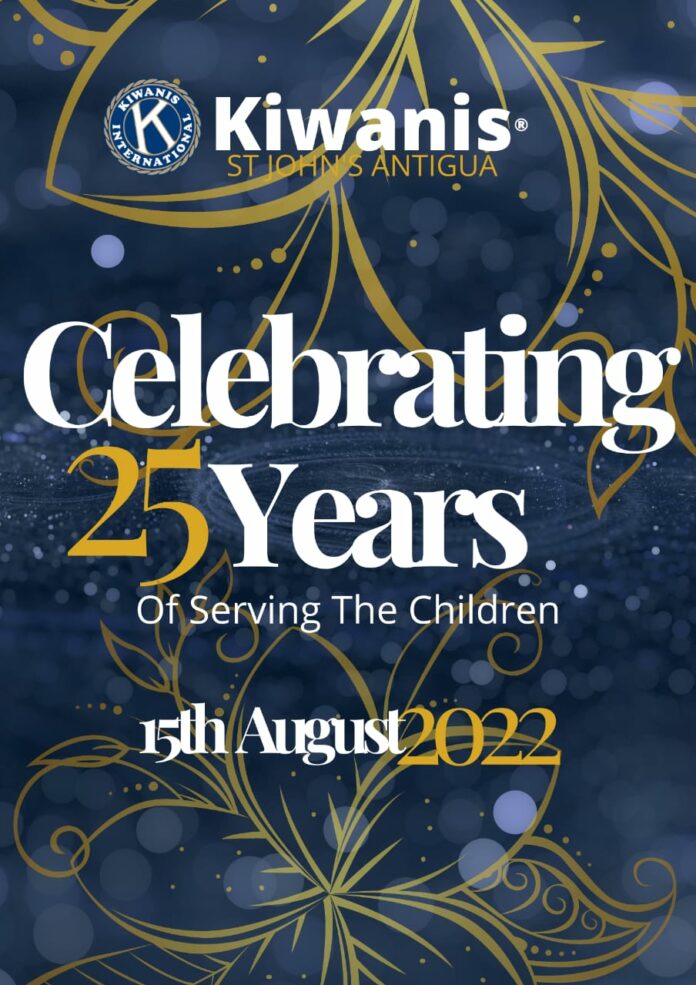 The Kiwanis Club of St John’s Antigua is today celebrating its 25th anniversary, after receiving its charter from Kiwanis International in Indianapolis, USA, on August 15 1997.

The club was formed with 27 members with the late Distinguished President Everett F Lake as the Charter President, and immediately after formation commenced its work of service to the children of Antigua and Barbuda as part of Kiwanis International’s global mission to serve the children of the world, one child, one community at a time.

Over the last 25 years, the club has, by the efforts and resources of its dedicated members, served communities in Antigua and Barbuda through various projects and initiatives.

In 2004, it introduced what has become its signature fundraising project, High Tea at the Dockyard, hosted annually since its inception, by the Copper and Lumber Store Historic Inn at Nelson’s Dockyard in English Harbour.

This is the club’s major fundraiser and is famous for its relaxing atmosphere, hat parade contests, numerous gate prizes and giveaways.

In 2017, the club launched the Everett Lake Scholarship Fund to assist as many primary school students as possible with back-to-school supplies on a yearly basis.

To mark its 25th year of service as an organisation, the recipients of the scholarship will be increased to 25 students, together with awarding the top 10 public school performers in the Grade Six National Assessment exams who will be entering secondary schools in the upcoming school year.

Over the years, the club has taught hundreds of children in preschool and primary schools proper dental hygiene as well as distributed dental supplies and first aid kits through its dental programme; assisted parents with toddlers through programmes such as ‘Toddling to Reading’, geared at introducing children to the art of reading and promoting literacy in young children, and its baby food and diaper drive and donations to the hospital’s maternity and paediatric ward; provided food and toiletries to families with children in need; assisted in beautification projects; and built playgrounds for children.

The club has also dedicated itself to bringing awareness to child abuse and its prevention, through various activities during the month of April, which is recognised worldwide as Child Abuse Prevention Awareness Month.

The club’s 25th anniversary celebrations commenced with worship and thanksgiving at the Holy Family Cathedral and will continue with a donation to the Sir Lester Bird Medical Centre’s Neo-natal Intensive Care Unit for the procurement of oxygen equipment and the beautification of a roundabout on Sir George Walter Highway, among other things.

The celebrations will culminate with an anniversary gala and board installation ceremony on October 1, which marks the beginning of a new administrative year for Kiwanis Clubs.

The club thanked all those who have supported its work over the years through their generous donations and continued partnerships.