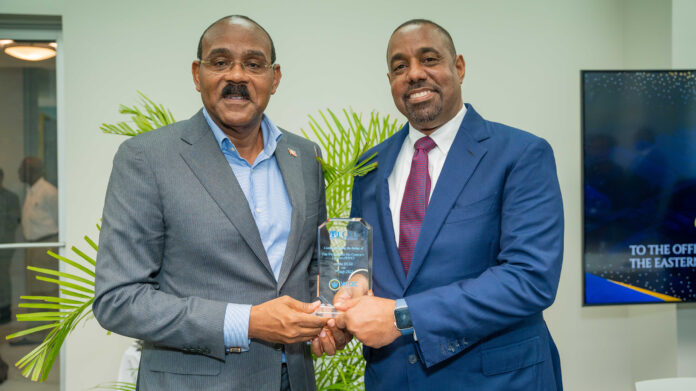 The West Indies Oil Company (WIOC) is shifting direction towards producing renewable energy to reduce the amount of greenhouse gas emissions it produces during its operation.

“We are into energy for a sustainable future,” insisted Georges, who on the sidelines of the official launch of WIOC’s listing on the Eastern Caribbean Securities Exchange (ECSE), told Observer that the technology to implement renewables is “getting better” and the cost to install and operate it “is coming down”.

“We think we can make it profitable. The idea is to invest in a solar plant and to negotiate a Power Purchase Agreement with the utility [company] and we think it can be profitable for us,” he said.

Prime Minister Gaston Browne who was the featured speaker at the event shared that WIOC recently entered into a Power Purchase Agreement (PPA) to generate electricity with the Hadeed Group of Company’s APC and a US firm.

Browne said he expects that WIOC will control the “lion’s share” of the country’s transition into renewable energy.

The company is however mindful not to move too quickly into the renewable energy space, citing high production costs.

In the meantime, they have engaged in a project to produce potable water using reverse osmosis. Without going into much detail, Georges said that the plant will produce 50,000 gallons daily.

WIOC is also expected to embark on other upgrades to reduce their environmental impact on surrounding communities and to make its tank farm a safer place to work.

Already in a space of five years, WIOC has increased its storage capacity by one million barrels, installed a second jetty to berth two tankers simultaneously, and has partnered with Rubis – an internationally-based petroleum supplier, storage and distribution company — to provide aviation fuel to the VC Bird International Airport.

An optimistic Georges concluded that within the next two years, shareholders in WIOC will witness its transformation into a modern energy company.

“I am going to be bold and say that by the end of 2024, shareholders, your company [possess] the more modern terminal facilities in the Caribbean – essentially a brand-new terminal,” he touted.

WIOC, established since 1965, recently became the first company in Antigua and Barbuda to list on the Eastern Caribbean Securities Exchange, and the first energy company to be listed on the ECSE.

Shareholders include the government of Antigua and Barbuda and 1,000 residents who purchased 10 percent of the company’s shares in 2021 when the company went public.