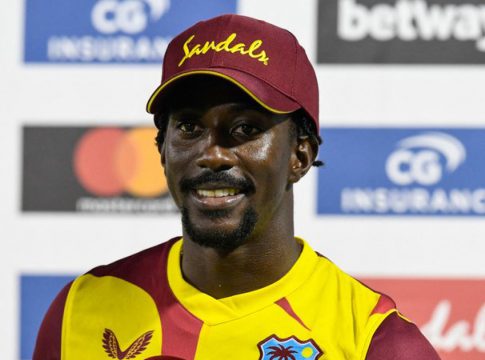 Antiguan cricketer, Hayden Walsh Jr., capped off his stellar performance in the recently concluded series win over Australia by being named Player of the Series.

The leg-spinner, was named Man of the Series for his haul of 12 wickets across the five matches, one short of the T20I series record of New Zealand spinner Ish Sodhi, also against Australia, earlier this year.

In the opening T20 match last week, Walsh helped turn around a contest against Australia, returning in the 11th over to remove Ben McDermott, Mitchell Marsh and Dan Christian as he and Obed McCoy took the last six wickets between them in 34 balls.

This series performance is one that the 29-year-old will definitely remember following his struggles in the last few months.

Walsh had tested positive for Covid-19 on the West Indies’ tour of Bangladesh at the start of the year, and though he was able to return to action in February in the domestic one-day Super50 tournament, he struggled in taking seven wickets at 37.42.

This series was his first international outing since late November in a game against New Zealand that was abandoned after two overs, so it was the first time he had bowled at the top level since March.

“Work hard. Be patient and God will take care of the rest. Awesome series Windies,” said Walsh after receiving the award and US$1000.

Despite being named Player of the Series, the Man of the Match award went to opening batsman, Evin Lewis, who smashed 79 runs off just 34 balls to lead the West Indies on their way to a 16-run victory over Australia in the final Twenty20 International (T20I) of their five-match series at the Daren Sammy National Stadium in St Lucia on Friday.

Lewis’ nine sixes and four fours, lifted the home team to 199 for eight and earned him the Man of the Match as the Caribbean team also took the series by a convincing 4-1 margin.

Nicholas Pooran (31 from 18) and Chris Gayle (21 from seven) also contributed with the bat for the home team.

Pacers Sheldon Cottrell and Andre Russell then claimed three wickets apiece as the tourists were restricted to 183 for nine in reply. Russell finished with a personal T20I best of 43-3.

Mitchell Marsh, who posted three half-centuries in his previous four innings in the series and was by a long way the visitors’ outstanding performer, looked set for another substantial contribution, but fell for 30 off 15 balls.

Despite being hampered by what appeared to be an ankle injury, Australian Captain Aaron Finch sought to keep his team in the hunt. However, when he fell for what proved a top score of 34 to Hayden Walsh via an outstanding catch by Fabian Allen at long on in the 10th over, the innings gradually ran out of steam.