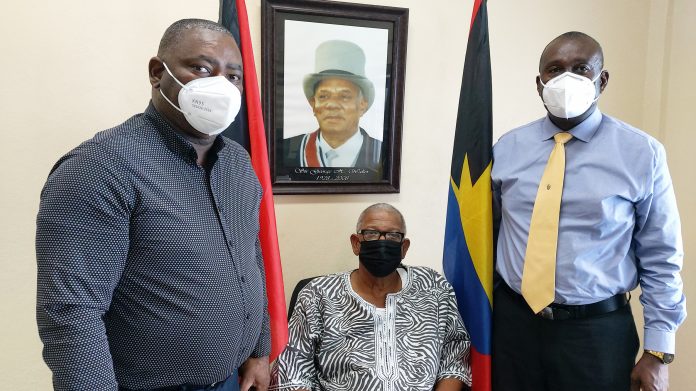 The Antigua and Barbuda Workers’ Union (ABWU) is demanding an apology from Prime Minister Gaston Browne, who made disparaging comments about the late premier and National Hero Sir George H Walter on Saturday.

In responding to comments made by the opposition of his perceived erratic renaming of the ADOMS building – a project which began under the leadership of the United Progressive Party (UPP) – Browne segued into a conversation about the ineptitude of the UPP to lead the country.

In doing so, he told listeners that Sir George was “just totally undeserving” of the status of national hero.

In his outburst, Browne said that Sir George only got a “cushy job” serving as the General Secretary of the Antigua Trades and Labour Union in 1960 because his father, who was a fisherman, had contributed to the union which gained him favour with Sir Vere Cornwall Bird – Antigua and Barbuda’s first premier and first prime minister.

Browne then accused the late premier and leader of the Progressive Labour Movement (PLM) of “undermining” Sir Vere. He said Sir George then “exploited” a quarrel that Sir Vere’s administration had with sugar workers who wanted a salary increase at that time.

The prime minister ended by saying that Sir George “served for one term, went to jail for misbehaviour in public office and they made him a national hero”.

But General Secretary of the ABWU, David Massiah and the hierarchy of the union came out in defence of its founding member’s character, listing various accomplishments to include putting to use the one billion gallon water catchment at Potworks Dam, the installation of the Delapps Water Treatment Plant, establishing the Antigua and Barbuda Development Bank, introducing the labour code, and creating the social security scheme.

“He demonstrated astute leadership at a critical juncture in the history when the nation was transitioning from colonial governorship to independence,” Massiah noted.

According to the ABWU General Secretary, the full impact of Sir George’s impact on Antigua and Barbuda may however still prove unsatisfactory to “an unreasonable and reprobate mind” and to those wishing to diminish his contributions to the country.

In relation to his time in prison, Massiah noted that “Prime Minister Gaston Browne’s reference to Sir George’s incarceration failed to note that the judicial body exonerated him from all the charges and in fact concluded that they were a result of a politically motivated witch hunt, aimed at destroying his character”.

The ABWU has therefore called for Browne to apologise for what Massiah described as an “unwarranted and vulgar attack” on Sir George.

“We call for an immediate apology and retraction of the vulgar comments made,” he said.

ABWU’s Deputy General Secretary, Chester Hughes chimed in, noting that “there’s a lot that can be said politically about Sir VC Bird, Sir Lester Bird, but it is not in our place to do that because they have ascended to the heights and respect of national heroes and our responsibility as a society is to continue to promote their contributions towards nation building and not bring down their contributions by maligning their character or their contributions”.

Former prime minister Baldwin Spencer whose government bestowed the honour of national hero on Sir George, also denounced Browne’s utterances, remarking that Sir George’s contribution matches and even outweighs, in some instances, the contributions of other leaders to Antigua and Barbuda.

He said it was “outrageous” and “demeaning” to suggest that Sir George was not deserving of his appointment as a national hero.

“When you look at what was accomplished by the PLM in those five years under his leadership, it is difficult to determine a period since then that could compare to what has happened in this country,” Spencer said.

Meanwhile, in response to the ABWU’s call for an apology and a retraction, PM Browne told Observer yesterday that “I stand by my statement; what I said about Sir George is the truth. To ask me to apologise is to ask me to tell a lie and I’m not going to lie”.