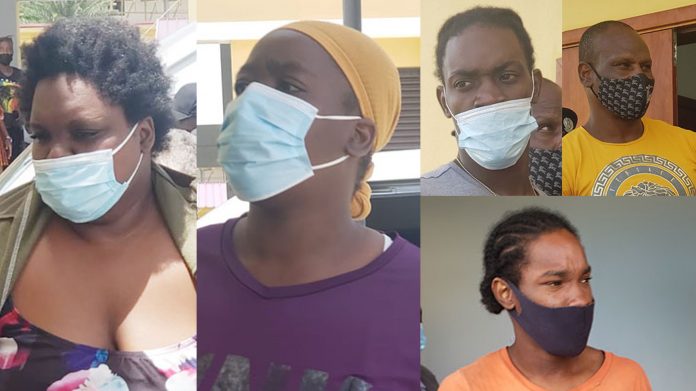 Supporters of the ‘Freedom Fighters’ and family members waited patiently outside the St John’s Magistrates’ Court yesterday afternoon for the outcome regarding five defendants charged in relation to Sunday’s protest against Covid-related policies.

The activity resulted in the arrest of several individuals to include Donette Simon and Shenel Williams who are jointly accused of “organising a prohibited public meeting”, and participating in said meeting.

Williams is also charged with incitement and encouraging unlawful behaviour.

Both women are now on bail, having been granted temporary release yesterday afternoon in the sum of $15,000 with a $1,000 cash component by Magistrate Conliffe Clarke.

The duo was represented by a team of lawyers comprised of Leon Symister, Wendel Robinson, and Charlesworth Tabor.

Prior to being offered bail, Symister asked that the charges not be put to his clients. He requested disclosure of the police file, inclusive of videos, messages and other electronic data and “the information upon which the warrants were issued” by the court.

The prosecution requested a month to provide the documents requested and the magistrate asked the lawyers to write to the court for the information they require.

Initially, the women were ordered to pay $1,500 in cash to secure bail, but Robinson begged for the monies to be reduced since one of the women is unemployed and the other only works part-time.

Thirty-four-year-old Simon of Tindale Road and 29-year-old Williams of Villa were then asked to satisfy the $1,000 cash component of the bail, surrender all their travel documents, provide two Antiguan sureties, remain residents of their current abode, report to the nearest police station three times a week, and to notify the police three days prior to moving to a different address.

The women are expected to plead guilty or not guilty to the charges on November 24.

Their lawyers also asked that the entering of pleas be deferred until disclosure is given.

The trio was also required to surrender all their travel documents, provide two Antiguan sureties, remain residents of their current abode, report to the nearest police station twice weekly, and notify the police three days prior to moving to a different address in order to be released from prison.

They must then appear in court on November 30 to enter their pleas.