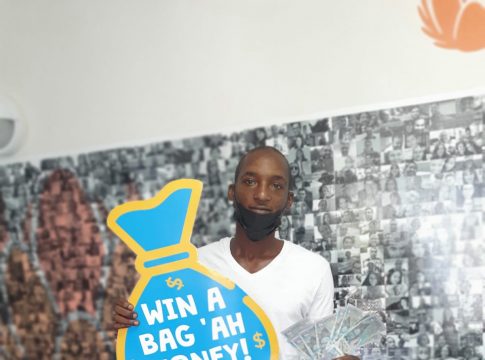 Azille said she was completely surprised when she got the call that she had won. She plans on spending her winnings on her three-year-old adopted son’s back-to-school needs.

Joseph, a student at ABIIT, plans to spend some of the money on tuition and has intentions on taking care of his grandmother and sharing his prize money with her.

Both winners will also have a chance to win the grand prize of $10,000.

“The genuine and heart-warming responses of all our winners so far show just how impactful our promotion is. The excitement that our summer Bag Ah Money promotion has generated in the market is rewarding.

“Everyone at team Flow is so looking forward to surprising the first of our $10,000 winners when that draw takes place on Friday 13th,” said Flow’s Marketing and Communications Manager, Shand Merchant.

“It’s going to be a very lucky Friday 13th for someone.”