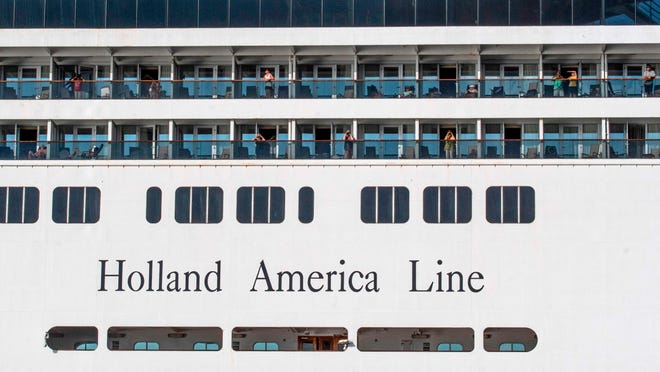 (usatoday.com) – President Donald Trump said Tuesday he is going to speak with Florida Gov. Ron DeSantis about whether to allow two Holland America cruise ships, one with four dead and 200 passengers and crew having had flu-like symptoms, to dock.

While never explicitly saying what he plans to tell DeSantis, who has raised concerns about allowing the ships into port, Trump said, “I am going to do what is right, not only for us but for humanity.”

Holland America’s MS Zaandam and MS Rotterdam cruise ships – one with ill people on board – have crossed the Panama Canal and are headed to Florida. But whether the coronavirus-infected ship and its sister vessel will be able to dock has been in question.

Holland America transferred healthy passengers to the Rotterdam, which met the Zaandam with additional supplies, staff and test kits last week. The two ships have remained together for the rest of the journey.

The Zaandam began its South American voyage from Buenos Aires, Argentina, on March 7 and was originally scheduled to end the sailing in San Antonio, Chile, March 21.

Burke said the company intends to treat those who are sick on the ship unless things progress to the point where that is no longer possible.

While nine people on Holland America’s Zaandam have tested positive for coronavirus, it is likely many more aboard the ship in limbo are infected.

“We’re assuming people who get sick have COVID,” Burke said.

Before the commission met Tuesday, plans for docking were criticized.

Local officials and DeSantis rebuked the plans. The governor said he had been in contact with the Coast Guard and the White House.

DeSantis said it would be “a mistake” to bring the cruise ship passengers into South Florida for treatment because the state already has a high, and growing, number of coronavirus infections. He said hospital beds need to be saved for residents and not “foreign nationals.”

But Trump expressed sympathy about the ordeal of passengers and crew who have been denied entry to ports in several nations.

“There are people who are sick … and we don’t want to be like they will be ghost ships,” Trump said. He noted the plight of a cruise ship that he said wandered across Asia “that went from port to port – nobody would take it – but the meantime you had people that are dying on the ship or at least very sick, but they are dying the ship.”

It wasn’t clear what cruise ship Trump had in mind, but Princess Cruises’ Diamond Princess ended a trip in Yokohama, Japan, in February with passengers quarantined as the virus spread. Five people who were on board have since died.

In saying he would speak to DeSantis, Trump said, “these are two very big ships and they have a lot of people, so I am going to be speaking to the governor.”

Only 11 people total have been tested on the Zaandam, with nine rapid tests coming back positive. There are around 200 rapid tests available on the ship, which sometimes result in false-negatives, according to Burke.

Four elderly passengers on the Zaandam died, though the causes of death have not been disclosed. As of Tuesday, 83 guests and 117 crew members had reported flu-like symptoms. Symptoms of the flu and coronavirus are similar. The COVID-19 coronavirus has sickened more than 855,000 people and killed nearly 42,00 worldwide as of Tuesday afternoon.

Erik Elvejord, spokesperson for Holland America Line, said on Tuesday only 14 guests and one crew member were still showing symptoms. That means “no more symptoms,” Elvejord said in an email. “For example, if they had a cough or fever, they no longer have it.”

All passengers remain in isolation, he said.

Andrea Bergmann Anderson, a passenger on the Zaandam, told USA TODAY that on Monday, the ship was scheduled to anchor near San Andres Island, but instead carried on. A plane was to bring in medical supplies and medically evacuate two passengers but was denied permission to land by the Colombian government, she said.

“Gov. DeSantis does not want us to dock,” Anderson told USA TODAY Tuesday. “I want to ask him how many people have to die before he will allow us to get people to the proper medical care.”

Burke said Tuesday that there are six ventilators on the Zaandam and two on the Rotterdam in addition to two transport ventilators, oxygen tanks, nebulizers, infrared thermometers and more.

Many of those who have become ill are crew members, Burke said. “Most of these crew members are relatively young and as a result they seem to weather the storm of the COVID better than some of the passengers and so the recovery rates have been very strong among them.”

The crew, he said, have not been in conditions that would require a medical evacuation.

A docking plan in progress in Florida

The U.S. Coast Guard said Tuesday that it’s working with Holland America on a detailed docking plan that would require two ships carrying passengers and crew from the ill-fated cruise to handle all medical issues without impacting South Florida’s already-stressed hospitals.

Broward County Sheriff Gregory Tony called the decision a “humanitarian crisis” and asked commissioners not to vote based on emotion. Allowing the ship to dock here would burden the local health care system and put residents at risk of additional exposure, he warned.

“This ship has been turned away from several countries already. We are the United States of America and we have never turned away people in need or those that are sick, but we are in some very, very critical circumstances where we as a country are going to have to determine, ‘Are we willing to take on this responsibility?’ ”

Fort Lauderdale Mayor Dean Trantalis told USA TODAY that he was “disappointed” with what he was hearing out of Tuesday’s meeting.

“I am seeing very little if any protocols putting into place,” he said. “In 48 hours these ships are going to dock and we still do not have clear instruction on how to triage these passengers when the ships dock.”

He was concerned, too, that the cruise line seemed willing to allow passengers to self-quarantine, including those who may be showing “partial symptoms” of coronavirus. “It’s very disappointing to think this cruise line is not willing to go the extra step to make sure the folks disembarking are completely cured.”

David Parks, whose mother and stepfather, Roy and Diane Smith, are on board the Zaandam, says the past 10 days in isolation have taken their toll on the couple.

“They have remained pretty upbeat. But I am seeing in their emails they are starting to get to their mental breaking point,” Parks told the Ocala Star Banner, part of the USA TODAY Network.

The news that Florida might not allow the ship to dock hit the couple hard.

“People in Florida need to stand up for us and help us get home,” Smith wrote on his Facebook page Monday.

Parks told the Star Banner that he is concerned that the longer his mother and stepfather, who are both in their mid-60s remain aboard, the greater their chance of falling ill becomes.

“They live in Florida. If they don’t dock in Fort Lauderdale, let them dock in Jacksonville. They have a military base there where they can be quarantined,” he said. “They are in a higher-risk group. I am definitely worried and ready for them to be home.”