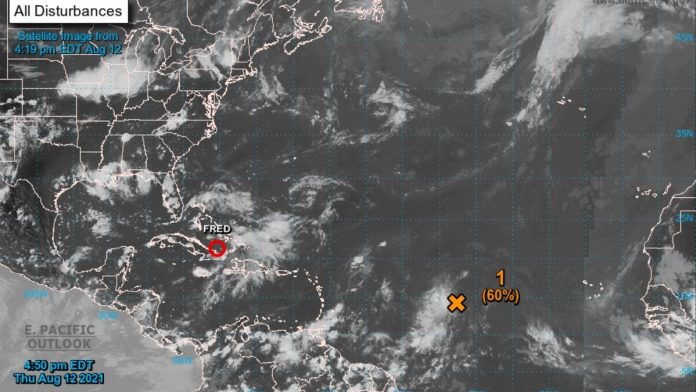 The current disturbance, Al95 has an over a 70 per cent chance of becoming a tropical cyclone that is likely to affect the Leeward Islands and the British Virgin Islands.

The National Hurricane Center (NHC) says environmental conditions are expected to become more conducive for additional development, and a tropical depression is likely to form by the weekend while moving generally westward at about 20 mph across the tropical Atlantic.

Although there are no watches and warnings at this time, the Antigua and Barbuda Meteorological said they may be required in the next 48 hours.

“Given the inherent forecast uncertainties regarding Al95 with respect to time of formation, eventual track, size and intensity, it is not yet possible to say with high confidence what will become of this system, at this time. Notwithstanding, at the reasonable worst-case, tropical disturbance Al95 poses a minor threat with the potential to cause limited impacts from storm-force winds, high seas and minor flooding, resulting in life-threatening conditions, some disruptions to daily life and minor damage to infrastructure. to be safe, be prepared to implement your hurricane season disaster plans”, the office said.

At 5 pm, the centre of Al95 was located about 1200 miles east-southeast of the leeward islands moving west at 20 mph.

Maximum sustained winds are near 30 mph with higher gusts. Gradual development is forecast and the system has a 70 percent chance of becoming a tropical cyclone.

On its forecast track, the system will likely affect the Leeward Islands late Saturday or Sunday.

However, the office says there is still a lot of time for it to shift to the north and spare the islands.

Residents are being asked to monitor the tropical disturbance closely and have their hurricane season plans prepared to safeguard life, property and livelihood, in the event watches or warnings are issued, sometime in the next 48 hours.

The next update will be around 9 pm this evening or sooner, if required.