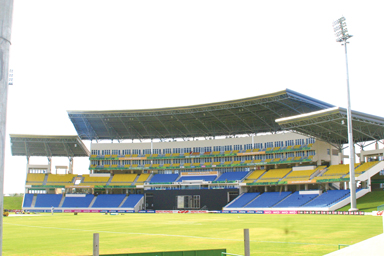 Members of a fitness group who regularly use the Sir Vivian Richards Cricket Stadium to train are upset after apparently being given no notice of its closure.

The Another Level Fitness (ALF) organisation said after training there on Monday morning, they found closed gates just hours later, and were told that all recreational activities had been discontinued until further notice.

At the time, the group, which has been using the venue for about four years, had not been told the reason for the closure and said they were not given “ample notice”.

One member said it was “disrespectful” and called it “bad business ethics”, noting that they pay $250 each month to use the facility.

It was not until they contacted the stadium manager Keithroy Blacks that they were told the decision had been taken by Sports Minister Daryl Matthew as a mitigating measure against Covid-19.

Blacks told Observer that the stadium had to be placed on lockdown because it was a challenge to manage the estimated 100 people who exercise there daily.

He said the decision was taken in accordance with the government’s guidelines concerning the congregation of no more than 25 people.

Blacks said that while patrons may argue that the stadium is big enough for the groups to spread out, they also had to take into consideration the bathroom facilities which were being used after sanitation workers would have disinfected the area.

The workout groups however have the option of exercising “on the outer perimeter of the fence”, Blacks said, as he assured them that authorities are working to install better lighting and aesthetics around the stadium to make it more comfortable for users.