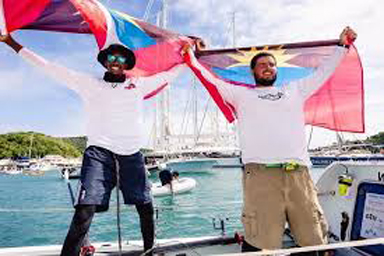 Almost three months after completing their journey across the Atlantic, Team Antigua Pairs – Travis Weste and Joseph Nunes say that things are relatively back to normal.

The duo were the first pair from Antigua and Barbuda to compete and complete the Talisker Whiskey Atlantic Challenge which is a 3000 nautical miles row from La Gomera to Antigua.

The pair arrived on January 28.

“Less and less people now will say you know ‘Oh look its Jojo, oh look its Travis;’ the limelight is starting to wear off, so we are not on the high anymore per se. I have pretty much gone back to normal life,” said Nunes.

“Likewise,” Weste added. “I think because of the mask thing, it’s hard to identify us. Some will still recognise you, but it’s not like when we just got back and I kind of like that.”

Both Nunes and Weste who were guests on the Observer AM show this morning, say they have been focusing on bettering themselves in their respective fields.

Nunes shared that since the row he has been working on certifying himself in sailing.

“I have completed a few courses. I have now almost qualified to work on a yacht. I am going to continue doing my courses and keep progressing in my seagoing career. I already have experience especially rowing across the Atlantic in a little row boat and that’s the base of everything. It gives me the upper hand,” Nunes explained.

Weste, who had no prior experience in sailing, also mentioned that he will be following in Nunes footsteps and begin the process of certifying himself in sailing.

He says it was the challenge that gave him a new-found appreciation for the sea.

“There’s no camera that can pick up all that we see out there. Just the feeling of being out there in the calm and even in the rough, just experiencing every bit of it, was just breathtaking. I haven’t regretted any bit of it and I now have some experience on the sea, and in the near future, I will be doing the additional courses as well,” Weste revealed.

“You never know what may happen in the future. Maybe ten years down the line and the opportunity comes for me to get out there on a super yacht, I will be ready,” he added.

They mentioned however that since the challenge, their friendship has strengthened to the point that they refer to themselves ‘as brothers.’

The pair who took 47 days, 6 hours, and 57 minutes to row across the Atlantic, have already donated US $10,305 dollars that they raised to the Rotary Club of Antigua Sundown. Five thousand dollars from that donation will go towards the Antigua and Barbuda Search and Rescue (ABSAR) which is a voluntary organisation dedicated to saving lives in Antigua and Barbuda and the surrounding waters.

The pair reminded listeners that although they have completed the row, they are still continuing their fundraising efforts through the sale of t-shirts and rash guards which can be purchased at Exotic Antigua.