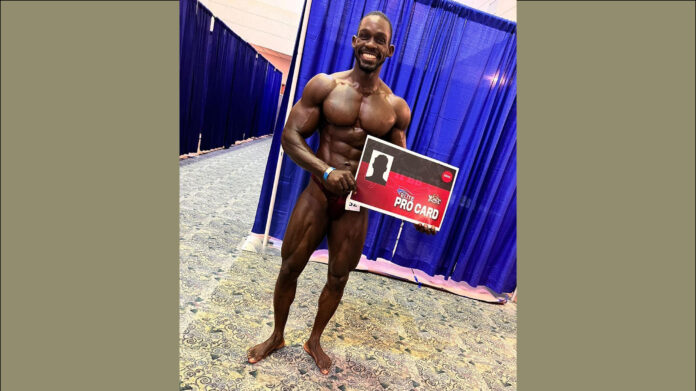 Antigua and Barbuda’s newest professional bodybuilder, Dwayne George, said the moment was emotional for him when he was named overall champion in the Men’s Classic Bodybuilding at the CAC Bodybuilding & Figure Championships held in Barbados over the Carnival weekend.

As a result of his success, the Antiguan was offered an IFBB Elite Pro Card which would allow him to ply his trade on the professional circuit.

“I can’t put words to how I felt. It was overwhelming because I was happy, I was sad; I was like you did it, you made your family proud, you made yourself proud, your friends proud, all your supporters proud, you made the country proud and everything just poured in all at once. There were so many different emotions but I decided to calm myself down because it was too much at once,” he said.

George, who was competing at his first CAC Championships, said however that he knew the title was in the bag at an early stage after seeing majority of his competition at the weigh in.

“The Friday morning [July 29] we realised that we were there, so let’s just see by the night how it goes. That night, when I took my clothes off I said okay, ‘you’re on’, and from that point onward I didn’t think that anybody could beat me because from the weigh-in and we saw the other competitors, it was clear to us that Antigua had it,” the athlete said.

Looking back at his journey this year, George concluded it was a long and tiring one.

“I was actually really tired and at the end I felt really exhausted and like I had put my body through hell and back because I did 16 weeks of nationals and that was an extra four plus weeks for CAC. So, in total, that was 20 weeks roughly where I was eating like a rabbit in terms of a lot of greens and so forth, but at the end it was all worth it,” he said. George also competed in the men’s Bodybuilding category, claiming gold in that division and silver in the overall competition.