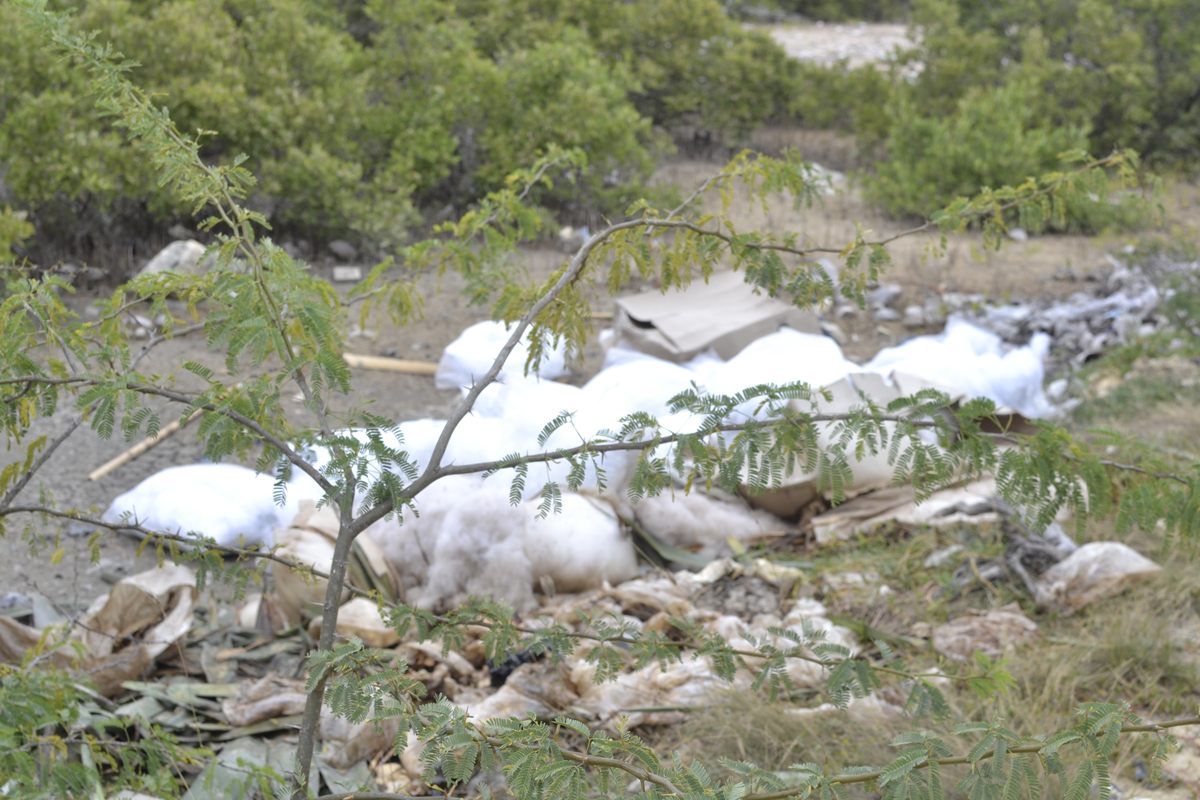 Tin cans made dancing noises beneath my feet as the wind blew through the mangroves as I walked across the dirt road that leads to the Fitches Creek Swamp.

I had prepared myself to trek through muddy waters to see a place rich with wildlife and natural beauty like I had seen at other mangrove sites but, instead, remnants of post disaster welcomed me.

A man-made road cut through the interior of the swamp where I would find someone’s dining room set that their children wore out all too soon; that old clothes dryer that forced them to pay the utility company more than they’d desired to; the lobsters from a seafood fest that someone once enjoyed; and old luggage and beer bottles that someone toasted to last summer.

I almost cut my hand on the rusty remains of a stove, a fridge, an old fan – something that did not belong amongst nature – while trying to capture photos of years of excess dumping.

The environmentalists that preceded me and several science and social sciences teachers from schools across the island, reported witnessing first-hand, a culprit of this illegal dumping on Tuesday morning.

“He saw us with our phones out and he just turned back around because he knew what he was doing was wrong,” the guides of the field trip all concurred.

It would seem that the threat of being charged $1,000-$5,000 for such an offence was not enough to deter that person, and many others like him, from polluting the wetland.

Alas, it would take the intimidation of a few mobile phones focussed on the unsuspecting perpetrator to get him to leave the area, but such policing cannot be expected around the clock.

Instead, local environmentalists agree that it must be the responsibility of every individual to acknowledge the importance of mangrove wetlands in this country, or it may just be a matter of years, or even months, before the mangrove wetlands in Fitches Creek Swamp could mirror Cooks Dump.

Human activity will continue to fragment this natural defence, allowing a large number of plants and animals that depend on the eco system to diminish. Already, dumping and backfilling has caused a directional change in the free water flow, creating sparse mangrove reproduction at the beginning of the trial.

Mangroves are tough plants but even the toughest of nature’s creations have breaking points.

The black mangroves in the area are especially resilient and have the ability to sprout snorkel roots that help them breathe in less than desirable conditions.

The white mangroves are surviving but their growth has been stunted because they are not receiving enough water, while the red mangroves – the poster child of mangroves – have to try even harder to protect the coastline, while holding off human waste.

Red mangroves have the most important function of creating a nursery system for hundreds of species while protecting the coastline in a remarkable way. It serves as an interface between land and sea – filtering land runoff so that too many nutrients do not enter the sea, while preventing land waste from getting into the oceans.

However, the latter is not its primary function, one guide said, noting that nature was not meant to account for such vast human waste.

If illegal dumping and burning does not cease immediately, the community of Parham could be left at the mercy of adverse weather systems over time.

It is reported that over the past 30 years, about 52 percent of the mangroves that once encircled Antigua and Barbuda have been lost, and those that survive are under constant threat of pollution and developmental destruction.